U.N. agency warns children globally facing the worst of the impact of this year’s flooding 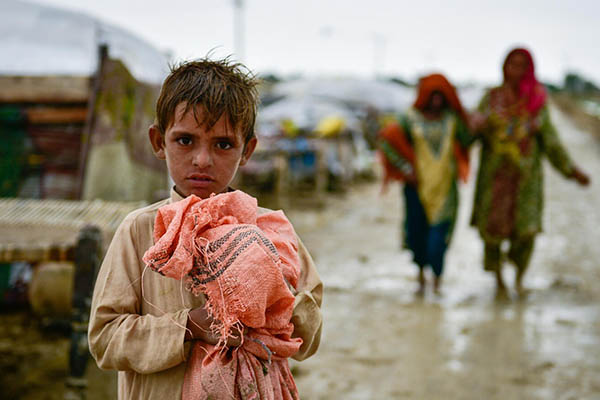 Over 1 in 9 children-under-five who were admitted to health facilities in flood-hit regions of Sindh and Balochistan have been found to be suffering from severe acute malnutrition, UNICEF warned on Wednesday, stressing that this year’s floods had significantly increased threats to children.

In a statement issued amidst the ongoing COP27 summit in Egypt, the children’s aid agency noted that at least 27.7 million children in 27 countries had been impacted by flooding in 2022 thus far. A majority of these children, it said, were among the most vulnerable and were at high risk of a multitude of threats, including death by drowning, disease outbreaks, lack of safe drinking water, malnutrition, disruption in learning, and violence.

“We are seeing unprecedented levels of flooding all around the world this year, and with it, an explosion in threats to children,” said Paloma Escudero, head of the UNICEF delegation for COP27. “The climate crisis is here. In many places, the flooding is the worst it has been in a generation, or several. Our children are already suffering at a scale their parents never did,” she added.

According to UNICEF, the aftermath of floods tends to be deadlier for children than the extreme weather events that preceded them. In 2022, it said, floods had contributed to the increased spread of major killers of children, such as malnutrition, malaria, cholera and diarrhea. Additionally, it stressed, flood waters had disrupted essential services and displaced countless families, with nearly 27,000 school buildings in Pakistan being damaged or destroyed by its floods, forcing 2 million children to miss school.

Apart from Pakistan, said the U.N. agency, Chad, Malawi and South Sudan had also suffered flooding, worsening their food insecurity and causing damage to water and sanitation systems that boost the spread of disease. In Nigeria, it said, an estimated 840,000 children had been displaced due to flooding, while heavy rains in Yemen had caused extensive damage to shelters in displacement sites, impacting 73,854 households and displacing 24,000 households.

“COP27 provides an opportunity to chart a credible roadmap with clear milestones for finance for climate adaptation and solutions for loss and damage,” said Escudero. “Young people from the most affected places on Earth are drowning in climate inaction. Enough is enough. Lives are on the line—children need action now.”

UNICEF said that in addition to pressing governments and big businesses to rapidly reduce emissions, it was also calling on leaders to take immediate action to protect children from climate devastation by adapting the critical social services they rely on. Adaptation measures, like creating water, health and education systems that stand up to flooding and drought, will save lives, it stressed.

Recalling that in last year’s COP27, developed countries had agreed to double support for adaptation to $40 billion annually by 2025, it said this year’s even must be used to present a credible roadmap with clear milestones on how this would be achieved, with an aim to deliver at least $300 billion per year for adaptation by 2030. At least half of all climate finance should flow towards adaptation, it emphasized.

UNICEF also urged parties to find solutions to support those who are most likely to face climate losses and damages beyond the limits of what communities can adapt to, and called on governments to close the financial gap for addressing these irreversible changes for children.

The U.N. agency concluded its statement by calling on all stakeholders to focus on prevention (revisiting plans to cut emissions drastically); protection (adopt adaptation measures to protect children from impacts of climate change); preparation (educate youth on climate change to prepare them for its impacts); prioritization (highlight threats to children and youth by accelerating climate finance investment in climate-resilient social services).

Noting that UNICEF’s immediate humanitarian response to flood affected countries was wide-ranging, incorporating health, nutrition, water, sanitation and hygiene, child protection, and education, it lamented that a lack of funding had hampered the response in many countries. “For instance, the funding gap for the humanitarian response in Pakistan currently stands at 85 percent,” it said, adding it was nonetheless working to strengthen the resilience of communities and health infrastructure to withstand disaster-related hazards, and linked its work on humanitarian response and longer-term climate adaptation.