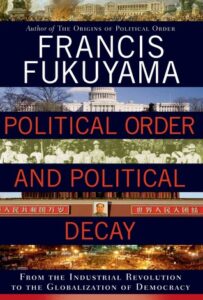 International relations scholar Francis Fukuyama, writing in 2014, noted of the then recently concluded Arab Spring: “The Arab Spring began in January 2011 with the self-immolation of a Tunisian street vendor named Mohamed Bouazizi, which brought down the dictatorship of Zine al-Abidine Ben Ali and triggered a cascade of uprisings that spread to Egypt, Yemen, Libya, Bahrain, and Syria, and threatened the stability of every regime in the region. Bouazizi, according to press reports, had his produce cart confiscated on several occasions by police officials. Denied recognition of his basic dignity, he doused himself with gasoline and set himself on fire, eventually dying of his burns two weeks later. His story, broadcast around the Arab world, evoked sympathy and outrage, and proved to be the trigger for a major political revolution.”

Some observers had believed that Muslim or Arab countries faced special obstacles to democratization absent in other regions of the world. Since it was the one region largely unaffected by the Third Wave of democratization, either Islam or Arab culture was held somehow responsible for resistance to liberal democracy. Any simple arguments that the Arabs were exceptional and would passively accept dictatorship ended with the events of early 2011.

However, predictions of Arab societies being unable to sustain liberal democracy might prove correct in the longer run. Over a decade after the Arab Spring, it does not appear that this form of government is likely to emerge anytime soon in countries affected by it, with the possible exception of Tunisia. In Egypt, the Muslim Brotherhood was elected and dominated the new parliament and presidency for a year, until the military pushed its president, Muhammad Morsi, out of power in the summer of 2013. The Egyptian army then launched a bloody crackdown against not only Islamist groups but against liberal critics as well. The Tahrir Square uprising was not a solution that displaced the military-led state; it only pushed it into a political retreat.

Libya remains chaotic in the wake of the military struggle against Muammar Qaddafi, with the central government unable to remove the country’s many militias. Peaceful protests against Syria’s Bashar al-Assad were ruthlessly crushed, and the country descended into a civil war that has pitted radical Islamist fighters against the Ba’athist dictatorship. In Bahrain and the other Arab Gulf states, protests were violently repressed and the traditional monarchies remain in power. Throughout, violence and instability have helped the fortunes of the groups that are overtly antidemocratic.

It is of course impossible to predict the long-term consequences of the Arab Spring. However, those observers who criticized the chaotic upheaval and argued that they cannot lead to a good democratic outcome in the long run often fail to remember what a long and chaotic process the democratization of Europe was. A stable, well-functioning democracy involves the interaction of a number of different institutions, not just elections for a president or legislature but also well-organized political parties, an independent court system, an effective state bureaucracy, and a free and vigilant media. In addition, there are a number of cultural conditions necessary: politicians and voters cannot have a winner-take-all attitude toward their opponents, they must respect rules more than individuals, and they must share a collective sense of identity and nationhood. Bringing down dictators like Ben Ali or Mubarak eliminates only one source of authoritarian power. Putting the other institutions in place is not a process that happens overnight. The American architects of the Iraq invasion expected that democracy would appear spontaneously in the wake of their removal of Saddam Hussein. They discovered to their dismay that they had to preside over a chaotic and violent society from which institutions were largely absent.

Future of the Arab Spring

What lessons do earlier democratic transitions hold for the future of the Arab Spring? There are many obvious differences between the Middle East and regions like Eastern Europe and Latin America, beginning with culture and the impact of Islam. Indeed, 19th century Europe might constitute a better precedent for political change in the Arab World than the democratic transitions of the Third Wave that took place during and after the 1970s. In the late-20th-century transitions in Latin America and Eastern Europe, we are dealing mostly with countries that already had had some experience with democracy. Those early democratic periods, some of which had lasted for decades, were interrupted by military takeovers in Latin America and by foreign occupation in Eastern Europe. Democratization was therefore in some sense the restoration of an older political order that had roots in the national experience of each country. In Latin America especially, there were already well-established democratic political parties that regenerated themselves rather quickly once an opening occurred. In Eastern Europe, the countries of Western Europe and the European Union constituted nearby offered powerful examples of successful democracy with substantial assistance and incentives to democratize.

In contrast, the Arab world today and Europe in the 19th century had no prior experience of democracy. While there is today a large international community providing both political models and concrete democracy assistance, it is largely based in the U.S. and other astern countries, and therefore suspected by many in the Arab world. This differs markedly from the open embrace of the European Union, NATO, and other Western institutions by Eastern European countries newly liberated from Soviet domination.

While both the contemporary Middle East and 19th century Europe had no direct experience with democracy, there are also important differences between the regions, beginning with political Islam. Religion played a major role in 19th century Europe as well: the German Centre Party and the Christian Democratic parties in France and Italy were organized to defend religious as opposed to class interests. But still, class and nation tended to be more important sources of identity than religion in Europe, while the reverse is more often the case in Middle East today. (This was not always so; from the 1950s to the 1970s, politics was dominated more by secular nationalists than by Islamists with a sprinkling of left-wing Socialist and Communist parties.)

Conservative forces have a different character as well. Of today’s Muslim countries, only Pakistan has a social structure of large landlords dominating masses of peasants, as most European countries did in early 19th century. Conservatives in most Muslim and Arab countries are recruited from tribal elites, traditional monarchical families and their clients, military officers, crony capitalists surrounding the old authoritarian regimes, and Islamists. Europe’s conservatives did not have external sources of support, except for the help they rendered each other. Middle Eastern conservatives, by contrast, have gotten substantial external assistance from the U.S. and other Western countries, especially through the bonanza represented by oil and gas in the Persian Gulf. The working classes throughout the region are much less powerful than they were in 19th century Europe, since much of them, similar to Greece and southern Italy, has experienced “modern; without development.” Trade unions exist in Egypt and other parts of the Arab world, and although they played important roles against the authoritarian regime, they do not represent massive segments of the population in the way they did in 19th century Britain or Germany.

Nonetheless, there are a number of similarities between the Arab World today and Europe of a century ago. In the first place, the democratization process was rooted in social mobilization driven by underlying sociological and economic change. As industrialization progressed in 19th century Europe, it created an expanding middle class and a proletariat. Masses of former peasants left the countryside for cities, where they were available for recruitment by new political parties and were susceptible to appeals based on identity politics.

Something similar has been going on in the Middle East since the later decades of the 20th century. The region is urbanizing rapidly, growing from 30 to over 50 percent of the population between 1970 and 2010. The Human Development indices compiled by the U.N. (a composite of indicators of health, education, and income) increased by 18 percent in Egypt and 30 percent in Tunisia between 1970 and 2010. The numbers of college graduates increased at an even faster rate, in both countries, with a rise in complaints about the lack of jobs commensurate with levels of education. It was these groups that were the most savvy about using the Internet and social media to spread images of repression and organize demonstrations against the regime.

In Political Order in Changing Societies, Samuel Huntington argued that the middle classes are critical to political change. Revolutions, he noted, are never organized by the poorest of the poor, because they have neither the resources nor the education to organize effectively. The middle classes, by contrast, are the group most likely to have experienced rapid increases in their social status and therefore face the sharpest disappointment if their subsequent mobility is blocked. It is the gap between expectations and reality that creates political instability.

In both the Arab world and in the European Revolutions of 1848, the middle classes were the key actors in organizing the revolution and pressure for political change. The Tunisian uprisings against Ben Ali and the Tahrir Square demonstrations against Mubarak were led by urban middle-class individuals who felt that their chances for social and economic advancement were being thwarted by the authoritarian regime. The upheavals in Libya and Yemen were more complicated; the middle classes there were less numerous and complex tribal rivalries also were at work. There was a somewhat larger middle class in Syria, but sectarian entity quickly overwhelmed class or economic grievance.

A new middle class was not the only product of urbanization. In many respects, the rise of political Islam in the Middle East can more appropriately be seen as a form of identity politics than as a matter of revived religiosity per se, and as such has displaced class as a rallying point for the mobilization of political outsiders. That is, the Middle East experienced the same kind of shift from Gemeinschaft to Gesellschaft, in the late 19th century, with all of the anomie and identity confusion that such a shift entails. For a generation after independence from colonialism, secular nationalism worked as a source of identity, but it was credited by the late 1970s as a failure to produce consistent and declared economic growth, and by its political failure in dealing with issues like the Israeli-Palestinian conflict. The vacuum was filled by religion. It became a clear source of identity to recently urbanized rural folk who now had access to satellite television and the Internet. One of the lessons for the strength of political Islam today is that it can speak to issues of identity, religion, and social class simultaneously.