In joint press conference, U.N. chief laments Pakistan not given the kind of debt relief, concessional funding it needs to counter impact of climate change 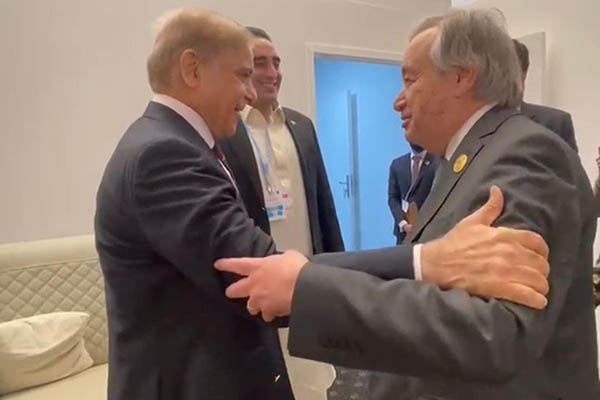 Prime Minister Shehbaz Sharif on Monday reiterated that Pakistan’s response to the devastation of this year’s floods is defined by resourcing the humanitarian gap in relief and rehabilitation, stressing this was restricted by increasing public debt, rising global energy prices, and a lack of access to adaptation funds.

Addressing a joint press conference with United Nations Secretary General Antonio Guterres on the sidelines of the COP27 summit in Sharm el-Sheikh, he recalled that Pakistan’s losses due to this year’s floods had already exceeded $30 billion. He said the devastation had led to a surge in poverty rates, with over 9 million Pakistanis pushed into a life of extreme poverty, and an additional 1.9 million families into multidimensional poverty.

Lamenting that the impact on GDP alone from the flooding was 2.2%, he stressed that extreme climate events such as heatwaves, forest fires, and glacier melting had already created a 9.1% drag on Pakistan’s GDP annually. “As a global community, we are poised on the threshold of a new green deal, or a trajectory to a 3 degree world, where returning to the Earth we know today will be impossible,” he warned, noting that some countries Pakistan would suffer more while those living in cooler longitudes would suffer less.

Emphasizing that millions of people in Pakistan were entering the cold winter months without any shelter or livelihood, he said women and children were looking to authorities for their basic needs, even as entire villages were facing a precarious future as the government lacked the resources needed for their rehabilitation. “Huge lakes of stagnant water have transformed the landscape of the south, where crops would have fed millions, and livestock would have saved families from destitution. We are picking up the pieces as we speak, but hundreds of bridges still lie broken, like the 8,000+ km of metaled roads ripped out like toothpicks from the fury of the raging torrents, triggered by the record-breaking floods from the monsoon on steroids,” he said.

Noting the Benazir Income Support Program had disbursed urgent cash transfers equaling Rs. 70 billion to the most vulnerable 2.8 million families, he added: “We have mobilized every available resource towards the national relief effort, and repurposed all budget priorities, including resilience and development funds, to the rescue and first order needs of millions.” At the same time, he stressed, the government needed to build up its adaptation and resilience. “Our reconstruction planning is also in its final stages. We will be looking to leadership of the United Nations secretary general in building a viable support platform very soon at the Donors’ Conference,” he said, thanking the relevant U.N. agencies, the World Health Organization, and other development partners in supporting Pakistan during this unprecedented challenge.

Addressing media, the U.N.’s Guterres appealed to international financial institutions and G20 countries to provide debt relief to Pakistan to help its post flood reconstruction and rehabilitation efforts. Reiterating his proposal for a debt swap—exchanging debts with investment in rehabilitation of flood-hit communities—he stressed that Pakistan was a middle income country and was not being given the kind of debt relief and concessional funding it needed to tackle the adverse impact of climate change.

Underlining the need to define a clear road map to deal with the disaster, he said this could be achieved by creating an institutional financing framework. He also confirmed that he would soon host an international donors’ conference for Pakistan, noting that the country needed massive support for rehabilitation of communities affected by floods.

On the sidelines of his participation in the COP27 summit, the prime minister also met European Union Commissioner Ursula von der Leyen, thanking her for the support extended by the E.U. to the flood-hit population of Pakistan. “Unity is essential to combat the effects of climate change,” Sharif said, warning that the effects of climate change would eventually spread across the world.