Do Not Give Imran Khan any ‘Face-Saving,’ Nawaz tells P.M. Sharif 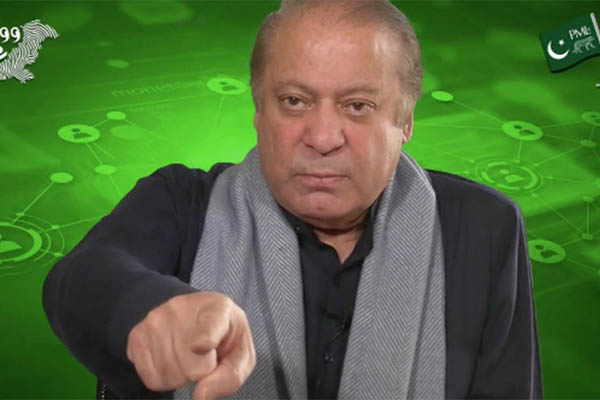 In a series of posts on Twitter, the elder Sharif said Khan had claimed he would bring 1 million people to the federal capital, but had not yet managed to gather even 2,000. “The public’s rejection is because of the mischievous lies whose reality has now been laid bare,” he wrote in Urdu, adding that Khan had stated so many lies without any remorse that he had “forced” Inter-Services Intelligence (ISI) Director-General Lt. Gen. Nadeem Ahmed Anjum to “break his silence” and speak the truth.

Despite the passage of several days since the spy chief’s press conference, said Sharif, Khan had been unable to respond to the revelations of the press conference. “This is why all his energies are currently focused on swearing and abusing,” he said. “I have told [P.M.] Shehbaz Sharif that whether [Khan] brings 2,000 or 20,000 people to Islamabad, none of his demands should be heard, nor should he be granted any possibility of saving face for which he is so eager,” he said.

“The prime minister should focus all his energies on serving the public,” he added.

The PTI has responded to the former prime minister’s remarks by saying if the party has managed to gather numbers as low as claimed by the ruling coalition, it shouldn’t appear so fearful of the long march’s entry to Islamabad. It has also reiterated that protesting is its democratic right and urged the judiciary to ensure this is not hampered.

Khan launched his party’s ‘Haqiqi Azadi’ march on Islamabad on Oct. 28, with an aim to reach the federal capital from Lahore on Nov. 4. However, on Monday, the PTI chief said he would need 8-9 more days to reach Islamabad, shifting the arrival toward mid-November.