While risking international isolation, the PTI’s anti-American narrative sells because it aligns with the prevailing ideology of Pakistan 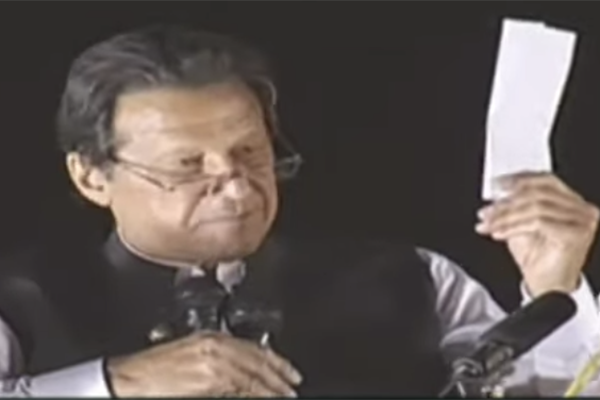 Since Pakistan Tehreek-e-Insaf (PTI) Chairman Imran Khan waved a piece of paper during a rally in March and accused a “foreign power”—the U.S.—of overthrowing his government, it has been clear that he has decided to cash in on the simmering anti-American sentiment in the country. The narrative has sold, due in large part to how many in Pakistan find themselves “ideologically” arrayed against the superpower. Since such emotion is rampant in all walks of life, it suits Khan to lean on it and eye elements inside the Pakistan Army who might side with him and bring him back to power. America’s recent push toward India as a foil against China—a friend of Pakistan—adds further justification.

What has gone into retreat under Khan’s debunked conspiracy is the realist or pragmatic school of thought that weaker states lean on to avoid implosion in the wake of external isolation. The PTI chief sees Pakistan standing on the crossroads of breaking away from what he regards as a hegemonic power. There is a lot of historical literature on hegemons, critical when described by the Left, but positive when described by realist schools of thought. In Pakistan, the competitive-hegemonic “pax” of two superpowers shored up the country’s military power against India after 1947 and, unfortunately, prevented it from adopting a realist posture in South Asia. Hegemons have been held up in power because of the “pax” they provide, especially to weaker states. Anti-Americanism all over the world is actually hatred of the hegemon; people in Pakistan hate America along with a majority of the Islamic world on the basis of a flawed interpretation of world affairs in which “America is an enemy of Islam.”

The most outstanding reason for hating America is embedded in the campaign of “reinterpreting” Taliban and Al Qaeda terrorism in Pakistan. Every time an attack by the Pakistani Taliban on the civilian population is reported, a loud chorus blames it on America’s “unfair” war in Afghanistan while ignoring the possibility of India using money to get the Tehreek-e-Taliban Pakistan to attack inside the country.

It all started with a bipolar world, with leftist India aligning with Russia and right-wing Pakistan siding with America. The collapse of the Soviet Union proved that Pakistan had chosen the right path; however, with the passage of time, that has changed owing to the pattern of recruitment in the Pakistan Army, its Islamization, and the socioeconomic origin of its officers. One senior officer of the Pakistan Army even went to the Middle East to fight America after his retirement! Imran Khan as a leader has all the right ingredients needed for charisma in today’s Pakistan: apart from his Islam credentials, symbolized by “tasbih” he carries everywhere, his anti-Americanism touches the chords created by Pakistan’s “ideological” system of education and the powerful clerics dreaming of an Islamic State.