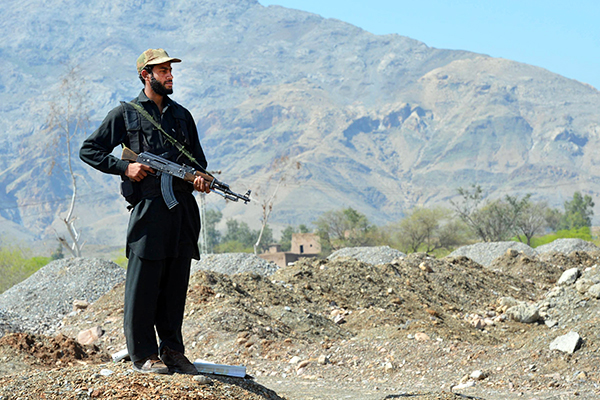 File photo of a paramilitary soldier at a checkpost in Khyber agency. A. Majeed—AFP

There has been a surge in attacks on security forces and civilians in various parts of Khyber-Pakhtunkhwa in recent months. Last week, gunmen on a motorcycle opened fire on a police mobile in Lakki Marwat, martyring six personnel en route to a weekly cattle market for routine security duties. This attack was subsequently claimed by the Tehreek-e-Taliban Pakistan (TTP).

In the first nine months of this year alone, over 450 people—mostly security forces personnel—were killed in terror attacks across Pakistan, a majority of which occurred in KP. The general perception of Balochistan being the only province with a weak or non-existent writ of the state might need to be expanded to include KP too, as the two provinces comprising nearly half of Pakistan’s total territory struggle to establish the state’s writ after 75 years of Pakistan’s existence. Don’t blame the TTP for targeting the state of Pakistan as an “intruder” in the northern belt; rather think and mourn over the decades Pakistan kept the erstwhile tribal areas as “semi-autonomous,” ignoring the laws imposed in the rest of the country.

Remember warlord Mangal Bagh, who led the Lashkar-e-Islam, and fled to Tirah, the high-altitude valley that was long described as a tribal no-man’s land. He swiftly became the de facto ruler of the Khyber Agency after killing those who resisted him, building a personal army, and earning an income by imposing heavy fines on local inhabitants for petty neglect of pieties. Similar scenarios played out in South Waziristan and Swat: intimidation followed by “empowerment” of those abandoned by the state of Pakistan as soldiers and suicide-bombers.

The “tribal area” governance vacuum has resulted in almost half of Pakistan’s territory being run by warlords. “Loss of territory” or “loss of effective control” of the erstwhile tribal areas also left Pakistan exposed to cross-border infiltration from Afghanistan. British lawmaker John Stuart Mill, whose theories still influence international law, has strongly refuted invasions of sovereign states aimed at making them internally benign; but in Pakistan’s case, it is elements within its own population who have escaped into tribal Afghanistan and want to prevent the country from violating the tribal “purity” of their homes. They can’t be fully blamed because of what the state has failed to do for them in the past.

For years, Pakistan hosted “warriors” unhappy with their states in the Middle East and Central Asia, equating Islam with tribalism opposed to the concept of the modern state. Then one even saw a regional consensus developing against Pakistan, counting within it states like India, Iran, Afghanistan, Uzbekistan, Russia and even friendly Turkey. Out of these, Russia reacted to Chechen terrorists being trained and sent into Dagestan from Pakistan; Uzbekistan reacted to terrorists being trained and sent to Tashkent. China largely kept quiet but tacitly supported reprisal attacks because of the training its Uighurs were receiving in Waziristan.

This year, Pakistan marked its Diamond Jubilee, celebrating 75 years of existence. It is high time the country finally become a proper state, with its writ applying to its entire territory.