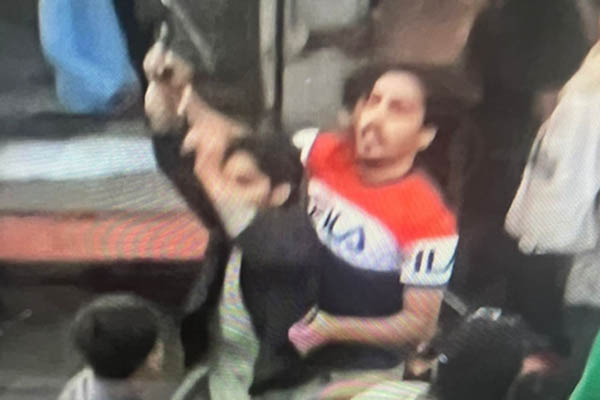 Screengrab of the assailant being captured by a citizen.

On Thursday, Oct. 4, a man armed with a handgun—suspected to be one of multiple shooters—opened fire on Pakistan Tehreek-e-Insaf (PTI) Chairman Imran Khan when he was leading the PTI’s “long march” in Punjab’s Wazirabad. Khan was injured after being shot in the leg, while PTI Senator Faisal Javed, and other leaders Ahmed Chattha and Umar Dar were also wounded. Police have reported 13 people were injured in total, and a passerby was killed. The detained man was prevented from causing further violence by a citizen, who risked life-and-limb to capture him and place him in police custody. Shortly after he was arrested, police leaked a confessional video to media in which the suspect claims he decided to kill Khan for “misleading” the public and playing songs on his container during the call to azaan. This “confession” was not liked by an ally of Khan, Punjab Chief Minister Chaudhry Pervaiz Elahi, who suspended the relevant SHO for releasing the video and ordered an inquiry into the shooting to determine who planned the assassination attempt.

Politicians of all parties, in particular the ruling PMLN and PPP, condemned the attempted killing of Imran Khan. But the PTI and its allies were sure—without any evidence—that the shooting was planned by the government, specifically “Interior Minister Rana Sanaullah, Prime Minister Shehbaz Sharif and Maj. Gen. Faisal [of the ISI].” The PTI rank-and-file also did not wait for any investigation before deciding on what had transpired: the struggle to rid the government in power had entered its final stage, prompting an attempt to remove Khan through assassination. One reason for Elahi’s decision to penalize police officials involved in the confession might well be the dent it causes to PTI’s “decisive” finding of the government and establishment concocting a plan to get rid of Khan and prevent his “long march.” The idea behind this thinking is that the tragic incident can be used to launch the “final stage” of Imran Khan’s campaign, leading to a direct confrontation between the PTI—already ruling in two provinces—and the authorities on the streets of Pakistan.

This could be seen playing out across much of Pakistan on Thursday night. PTI leaders, citing Khan, reiterated accusations of the prime minister, interior minister and ISI official being responsible for the attack and threatened nationwide protests if they were not deposed. This was followed by protests from Karachi to Peshawar, with tyres being burned, traffic snarls and threats of violence to people who attempted to breach the blockades erected by PTI supporters.

Pakistan appears to have entered the final stage of the political instability it has been witnessing for over 6 months, with a real possibility of the movement now spreading from the streets to within the institutions, including the Army. The PTI has declared that the “long march” will resume and demanded an FIR be registered against the premier, interior minister and ISI official over “attempt to kill.” The political situation will likely worsen in the coming days, as the public devoted to Khan is unlikely to consider any narrative that opposes the claims already issued by the PTI leadership. The ruling coalition, the establishment, and the country at large are in for tough times ahead.