Party rejects FIR as ‘mockery,’ maintaining it is unacceptable so long as it does not name the three people accused by Imran Khan 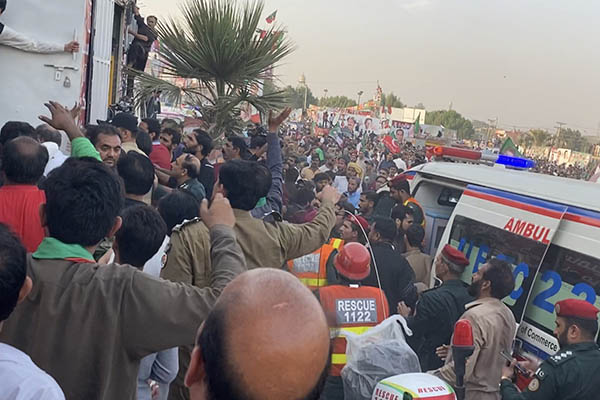 The Punjab Police on Monday night registered a first information report (FIR) on the attempted assassination of Pakistan Tehreek-e-Insaf (PTI) Chairman Imran Khan, over 96 hours after the crime occurred and only after the Supreme Court threatened to initiate suo moto proceedings if the delays persisted.

The FIR has been registered under Section 7 of the Anti-Terrorism Act and Sections 302 (punishment for murder); 324 (attempt to commit murder); and 440 (mischief committed after preparation made for causing death or hurt) of the Pakistan Penal Code. It nominates detained suspect Naveed as the primary accused, while leaving out Prime Minister Shehbaz Sharif, Interior Minister Rana Sanaullah, and Inter-Services Intelligence official Maj. Gen. Faisal Naseer, who Khan has accused of orchestrating the attack on his party’s long march in Wazirabad. As a result, Sub-Inspector Amir Shahzad has been made the complainant instead of the PTI, which has already rejected the FIR as a “mockery” of the Supreme Court’s directions.

On Monday, while hearing a contempt plea against Khan, Chief Justice of Pakistan (CJP) Umar Ata Bandial had summoned Punjab Inspector General of Police Faisal Shahkar and sought an update on the registration of the FIR. Upon being told that Punjab Chief Minister Pervaiz Elahi had objected to it, the CJP had directed the police chief to register the case without fear, adding that the court would ensure no one would be allowed to interfere in actions taken per law.

According to the FIR, the PTI’s convoy was moving toward Wazirabad from Allahwala Chowk when the accused, Naveed, opened fire on their container from the left side. It states that Naveed’s attack left Imran Khan and 11 others wounded, while killing Muazzam, a supporter participating in the rally. It goes on to say that a PTI supporter, Hasan Ibtisam, intervened and captured the shooter, preventing him from firing anymore shots. It also states that suspect Naveed is currently under custody of Lahore’s Counter-Terrorism Department.

The police said the FIR had been sealed and would be presented before the Supreme Court today (Tuesday), adding that its contents would be made public following the submission.

Reacting to the FIR registered by police, various PTI leaders described it as a “mockery” and demanded that it be amended to include the names of the prime minister, interior minister and Army officials. In a posting on Twitter, PTI leader Chaudhry Fawad Hussain said the PTI would only accept an FIR if the names of the three high officials were included.

Similarly, the PTI’s Shireen Mazari described it as “sheer mockery of the law and Supreme Court order.” Accusing police of trying to “cover up” the involvement of the three officials, she added: “Seems regime change conspirators hell-bent on destroying Pakistan totally for their own ends.”