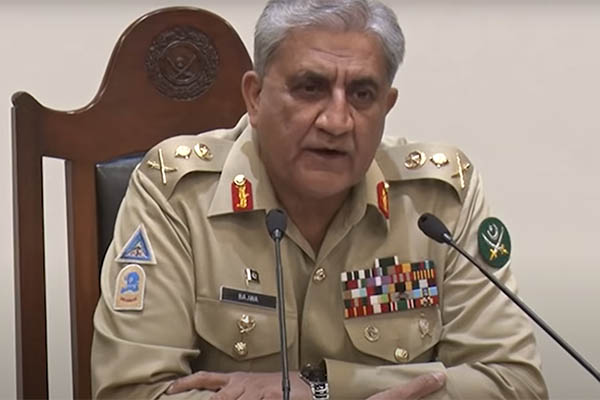 According to a statement issued by the Inter-Services Public Relations (ISPR), the Army chief laid a floral wreath at the martyrs’ monument and interacted with officers and troops during his visit. It said he had appreciated the efforts and contributions of the Corps and its formations for achieving peace and stability in Balochistan, as well as the assistance they had provided to the provincial government for socio-economic development and in the aftermath of this year’s floods.

He also visited the Command and Staff College and the School of Infantry and Tactics, interacting with faculty and student officers.

Also on Tuesday, the ISPR said Gen. Bajwa inaugurated the Sheikh Muhammad Bin Zayed Al Nahyan Institute of Cardiology Quetta, the first cardiac facility established in Pakistan with the collaboration of the United Arab Emirates. “[The] COAS said that this cardiac institute will serve the population of Balochistan at Quetta and two more such facilities are also planned for Balochistan under the same project,” said ISPR, adding that the event had also been attended by U.A.E’s ambassador to Pakistan; the Balochistan governor and chief secretary; and the Urban Poverty Alleviation Program (UPAP) director.

For his support to Pakistan, the COAS presented UPAP Director Abdullah Khalifa Saeed Al-Ghafeli with a Sitara-e-Quaid-e-Azam on behalf of President Arif Alvi.

Separately, according to the ISPR, Chairman Joint Chiefs of Staff Committee (CJCSC) Gen. Nadeem Raza, who is also set to retire, paid farewell visits to the Naval Headquarters and Air Headquarters in Islamabad on Tuesday. It said Gen. Raza had called on Adm. Muhammad Amjad Khan Niazi of the Pakistan Navy and Air Chief Marshal Zaheer Ahmad Babar Sidhu of the Pakistan Air Force.

“The CJCSC expressed his satisfaction on the combat readiness of Pakistan Navy and PAF and appreciated their resolve to safeguard the maritime and aerial frontiers of the country,” read a statement issued by the military’s media wing. It said the naval and air chiefs had thanked the outgoing CJCSC for playing a vital role in enhancing unity amongst the tri-services.