In speech at launch of Haqiqi Azadi march in Lahore, PTI chief warns DG ISI he has ‘secrets’ he is not revealing in national interest 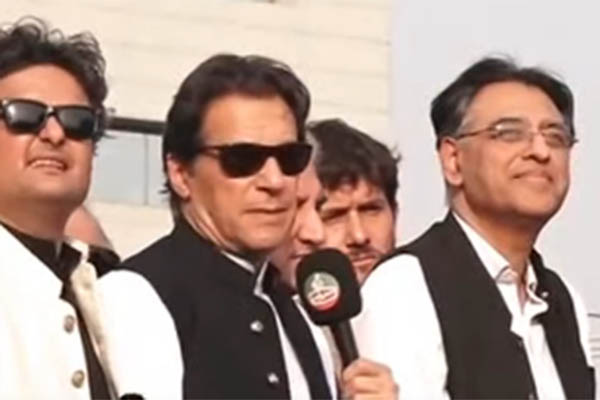 Pakistan Tehreek-e-Insaf (PTI) Chairman Imran Khan on Friday accused the Supreme Court, “with due respect,” of failing to uphold his party’s fundamental rights during its last long march on May 25.

“You [Supreme Court] did not protect our fundamental right to protest,” he told a crowd of thousands at the launch of his Haqiqi Azadi march in Lahore’s Liberty Chowk. Maintaining that the PTI’s long march would be peaceful and would not deviate from the sites in Islamabad that had been designated for it by the apex court, he said no one would enter the high-security Red Zone.

Claiming that the PTI had never staged a violent protest—falsely, as evidenced by the unrest of May 25 and the assault on PTV headquarters during its 2014 long march—Khan said he wanted to inform the court that the PTI would remain peaceful. “But criminal Rana Sanaullah [the interior minister] and [P.M.] Shehbaz Sharif should be monitored,” he urged the Supreme Court, as he encouraged his “young supporters” to ensure there was no violence from the PTI.

The PTI chief concluded his speech by taking an oath of allegiance from his supporters and commencing his march through Lahore. According to the PTI, it would proceed to Azadi Chowk in the Punjab capital today before wrapping up the day’s march. Tomorrow (Saturday), it would leave Lahore and proceed toward Gujranwala before finally reaching Islamabad next Friday, Nov. 4.

Earlier, commencing his speech, Khan had referred to an earlier press conference of PTI Senator Azam Swati, noting he had identified Maj. Gen. Faisal and Sector Commander Faheem as military officials who had tortured him. “They illegally arrested him [Swati] in front of his grandchildren, tortured him, and then put him in the custody of the military officials,” he claimed, alleging that he had then been stripped and beaten, as had Shahbaz Gill earlier.

“I ask you [Army chief] Gen. Bajwa, when [Foreign Minister] Bilawal Bhutto-Zardari gave a statement against the Sector Commander of Karachi over his excesses [during Khan’s time in government], you removed him from his position,” he said. “Remove these two [Faisal and Faheem] as well. They are maligning you Gen. Bajwa,” he said, reiterating claims of Swati’s “torture” bringing disrepute to Pakistan in global media.

Referring to the press conference of DG ISI Lt. Gen. Nadeem Ahmed Anjum, Khan then questioned his stance of being apolitical. “I have never heard a more political press conference even from [former interior minister] Sheikh Rashid Ahmed,” he said. “You [ISI chief] made irresponsible statements in that press conference,” he alleged, questioning why he had been singled out and the ruling coalition not been targeted as well.

“Listen to me DG ISI: the things I know, I am keeping silent on for the sake of my country and the institution,” he said. “I don’t want to damage my country,” he claimed, reiterating his criticism of “absconder Nawaz Sharif” of the PMLN. “He stays silent in Pakistan but maligns the Army from London; I am not leaving this country,” he said, reiterating that he wanted to see a Pakistan that was “free,” which needed a “strong” Army.

“DG ISI: when we criticize you, it is for your improvement,” he said, reiterating that he could respond to the spy chief’s remarks but he did not wish to “damage” the country. “The only point of this long march is to achieve real independence,” he said, adding that his sole desire was elections to allow the public decision-making powers.