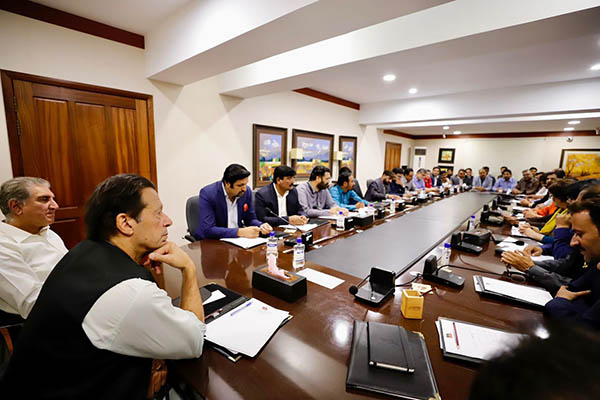 Pakistan Tehreek-e-Insaf (PTI) Chairman Imran Khan on Tuesday appeared to suggest to journalists at his Bani Gala residence that women journalists who enter male-dominated spaces were bound to be targeted, presumably with harassment though he did not clarify his remarks.

While conversing with delegations from the National Press Club and the Rawalpindi-Islamabad Union of Journalists, the PTI leader was asked about reports of women journalists being harassed at his party’s rallies. While maintaining that he would issue “special instructions” for his supporters to avoid such incidents, he appeared support their actions by adding: “If people like [journalist] Gharida Farooqui enter into male-dominated spaces, then such things will happen.”

This is not the first time that the ousted prime minister has expressed seemingly misogynistic remarks. In 2020, he came under fire for not challenging a statement by Maulana Tariq Jameel in which the cleric had blamed women for the coronavirus pandemic. In April 2021, he went further by advising women to “cover up” to avoid temptations for men, claiming that there are “consequences” for “vulgarity.” Emphasizing that not everyone has the “willpower” to resist women wearing immodest clothing, he said purdah should be observed for their own protection. Just two months later, while discussing sexual violence in Pakistan with a foreign journalist, he sought to hide behind cultural mores, saying: “If a woman is wearing very few clothes, it will have an impact on the men, unless they’re robots. I mean it is common sense.”

During his press interaction on Tuesday, Khan—who has repeatedly accused unsympathetic journalists of being “paid” by his political rivals—claimed he had only referred to one journalist as “lifafa” (paid): Saleem Safi, a prominent critic of the PTI. In response, Safi has challenged Khan to prove his allegations. Khan also claimed he had not filed any case against any journalist but Najam Sethi, adding that the matter was still pending in court.

To a question on trolling of journalists on social media—particularly from accounts linked to the PTI—the PTI chief said he could not deter them, as they were not under anyone’s control. This appears to contrast a leaked audio conversation between his wife, Bushra Bibi, and social media head Arsalan Khalid in which she directs him to declare rivals on social media as “traitors.” The call has been largely confirmed as accurate by Khan himself after he lamented the recording and leaking of a “private” conversation of his wife during a recent interview.

Khan was also questioned on reports that he only facilitates journalists who are “sympathetic” to the PTI. He claimed that this was untrue and alleged that some news outlets did not cover his press conferences. Curiously, he also claimed—while speaking with mainstream media—that only social media had any significance and the mainstream media no longer held much benefit for him.

The PTI chief, earlier this week, warned the ruling coalition he was giving them “some time” to announce early elections, adding that if they refused, he would stage a long march on Islamabad that could lead to “chaos.” During his press interaction, he alleged that the ruling coalition was “running away” from polls, adding that it was trying to get his disqualified from contesting office by lodging various criminal cases against him.

Maintaining that the long march was necessary for Haqiqi Azadi, he reiterated that it would commence before the end of the month and urged the journalists in attendance to support him.

Responding to questions about his four years in government, Khan reiterated claims that his administration had been “weak” and he would never accept such a setup in future. “There was a lot of pressure on me,” he claimed, in a marked departure from his time in office, when he would repeatedly maintain that all decisions were taken with his express approval.

Recalling his government’s achievements, the PTI chairman said the country’s economic growth had risen to 6 percent, which he attributed to his policies—another contradiction after he had said he had no real authority in power. Alleging that the incumbent government had “bankrupted” the country in just six months (a recent report by the IMF said Khan’s unfunded fuel and electricity subsidy played a large part in the current crisis), he accused P.M. Shehbaz Sharif of “stealing” Rs. 16 billion and being acquitted of the charges after coming into power.