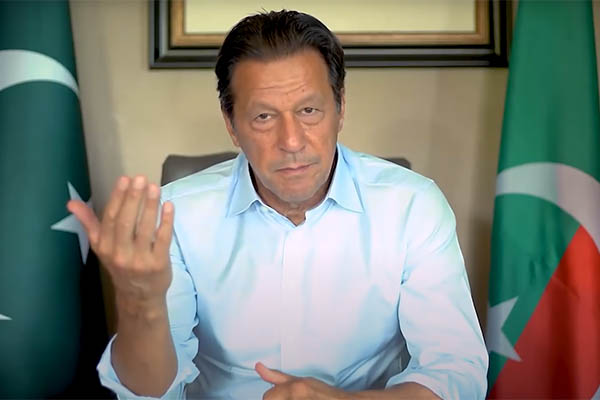 Pakistan Tehreek-e-Insaf (PTI) Chairman Imran Khan on Wednesday threatened to sue private broadcaster Geo News, anchor Shahzeb Khanzada and Dubai-based businessman Umar Farooq Zahoor a day after the channel broadcast an interview questioning the process by which Khan had sold off a watch gifted to him by Saudi Arabia.

“Enough is enough,” Khan wrote in a posting on Twitter. “Yesterday Geo [News] and [Shahzeb] Khanzada supported by handlers slandered me through a baseless story cooked up by a known fraudster and internationally wanted criminal,” he claimed, adding that he had spoken with his lawyers and they planned to sue the three entities “not only in Pakistan, but also in the U.K. and U.A.E.”

Khan’s threat followed a press conference of PTI leaders Zulfi Bukhari and Chaudhry Fawad Hussain in which they described Zahoor’s allegations as baseless and also vowed to seek legal redress. “In 2018, the Saudi crown prince gifted a watch to Imran Khan and the controversy over the watch’s price has been going on for a while now,” said Fawad, adding that the gift-set had been priced at Rs. 100 million by the Cabinet Division and Khan had subsequently sold it for over Rs. 50 million, as evidenced from his income tax filings.

Claiming the gift was not sold to Zahoor, the PTI leader also rubbished allegations of Bushra Bibi’s friend, Farah Khan, having any role in the sale. Accusing Zahoor of being a “shady” individual, Fawad said he had three brothers who were serving jail time in Norway, adding the businessman was facing criminal cases himself.

Bukhari, meanwhile, sought to deflect by questioning the Toshakhana purchases of former president Asif Ali Zardari and ex-prime minister Nawaz Sharif. While admitting they still possessed the gifts they had purchased from the Toshakhana, he questioned why media was not examining that—ignoring that Khan had sold the state gifts. “[Watch-maker] Graff has several shops in Dubai, the price of the watch can be obtained from any of those shops,” he said. “The dealer, who brought the watch from us, sold it at a rate of more than Rs. 60 million,” he claimed, adding that the PTI was aware of this person’s identity but was not willing to disclose it.

Speaking with Khanzada on Tuesday night, Dubai-based businessman Zahoor alleged that he had purchased the Graff gift-set—containing a gem-encrusted watch, cufflinks, gent’s ring, an enameled map, and a pen set—for $2 million, or roughly Rs. 280 million, in 2019. “In March 2019, former accountability minister Shahzad Akbar said he had a set of watches and if I was interested, I should reach out to Farah [Khan] as she needed help and didn’t have any asset buyer,” he said, adding that he had met Farah at his office in Dubai and had been instantly enamored by the set because of its unique nature and high value.

“She told me the history of the watch and said that it was gifted to Imran Khan by the Saudi prince. She said she wanted to sell these on Imran and his wife’s behalf,” he told Geo, adding that she had been seeking $4-5 million for the set, but he had negotiated it down to $2 million.

This sum, alleged Zahoor, was paid in cash on Farah Khan’s insistence, who said she did not want any banking transaction. “As soon as the payment was made, she told [Shahzad] Akbar over the phone that the deal was through and thanked him for introducing her to me,” he claimed, adding Akbar had subsequently thanked him for the purchase and requested that he not speak about this with anyone. “I agreed,” he said, stressing that he was willing to share all information with him in a court of law if called to do so.

During the interview, Zahoor also alleged Akbar had tried to blackmail him over a court battle between him and his ex-wife, Sophia Mirza. Reacting to the interview on Twitter, Akbar claimed he had never met or talked to Zahoor and accused him of being a “fraud.”

Zahoor is reportedly wanted for various financial crimes in Norway, Switzerland, Turkiye and Pakistan. His ex-wife also accuses him of “abducting” their minor daughters. He maintains that the “abduction” case was registered against him on Akbar’s urging.

Addressing the PTI and Khan’s threats of legal action, journalist Khanzada said he “welcomed” the challenge, emphasizing that he did not broadcast any story without due diligence. Referring to Khan describing Zahoor as a “fraudster,” he questioned why he had gifts given by Saudi Arabia to Pakistan’s prime minister. “If [Khan] did not sell the gifts to him [Zahoor], then whom did he sell it to?” he said, adding that it was Geo’s responsibility to conduct a full investigation before airing any story, but it was Imran Khan’s responsibility to respond to allegations on his conduct.

Noting PTI leaders had refused to appear on his show for months—the party is officially ‘boycotting’ Geo News—Khanzada said he was ready to face their legal challenges in whichever court they wished. He said the interview had raised 11 “important” questions that the PTI must answer:

The ruling coalition has also jumped into the fray, with members of the federal cabinet and leaders of all component parties demanding Khan provide documentation to support his claims. A key question that keeps being repeated—if Zahoor did not buy the gift-set from Khan, why is the PTI so resistant to share the identity of the man who purchased it in the first place?