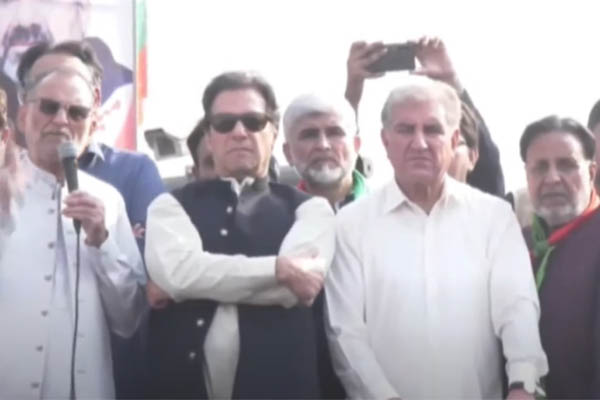 Screengrab of the PTI Chairman and other party leaders addressing crowds at Shahdara, Lahore

“An apolitical press conference would not have targeted only Imran Khan,” he said in a direct message to the ISI chief, questioning why he had not also criticized the “thieves” that Khan perceives all his opponents. “Do you not see the suffering being perpetrated on people, the fundamental rights of people being violated?” he questioned.

Earlier this week, in an unprecedented press conference, the DG ISI had joined the DG ISPR in saying a “certain group” was spreading lies and trying to divide Pakistani society. While neither official had explicitly named Khan, the PTI verified he was the politician being discussed by confirming that the party chief had offered a second extension to the Army chief during his tenure as prime minister in a bid to save his government from a vote of no-confidence.

The ousted prime minister also continued his criticism of the Supreme Court and CJP Umar Ata Bandial, saying the entire nation was looking at them to protect their fundamental rights. “The entire world takes action on custodial torture,” he said, questioning who would protect these rights if the CJP did not. Lamenting that he had been charged with contempt when he raised hue and cry over the alleged abuse of his aide Gill, he claimed he was talking about custodial torture, adding that if action had been taken then, the situation would not have been repeated for Swati.

“I am saying to you Chief Justice: take action on Azam Swati’s appeal. Show we are a civilized society. This is our right,” he added.

Earlier, Khan reiterated his claims—denied by the government—of PTI Senator Azam Swati being beaten up in front of his grandchildren and “illegally arrested” for posting a tweet criticizing Pakistan Army chief Gen. Qamar Javed Bajwa, Khan said he had then be given in the custody of “unidentified persons” who he then named as “General Faisal”—Maj. Gen. Faisal Naseer, the DG-C of the ISI Internal Wing—and “Brigadier Faheem”—Brig. Faheem Raza, the ISI Sector Commander of Islamabad. These people, Khan alleged, had brutalized the general public and journalists and also threatened and taken into custody various people.

He then reiterated the PTI’s allegations of party leader Shahbaz Gill; YouTube analysts Jameel Farooqui; and Swati being stripped naked and tortured while in custody. “I want to give them [ISI officials] a message: we are humans, not sheep,” said Khan, as he invoked religion to boost the gathered crowd.

“You [security establishment] cannot describe thieves as thieves one day, impose them on us the next, and then expect us to follow them as sheep,” he claimed, reiterating allegations of his rival politicians—specifically the PMLN’s Nawaz Sharif and PPP’s Asif Ali Zardari—having been branded as “corrupt” in the past and now being given a “clean chit.”

Reiterating his earlier demand for the Army chief to sack the identified ISI officials, Khan claimed the same had been done for incumbent Foreign Minister Bilawal Bhutto-Zardari when he complained of the harassment of Sindh Police. “These officials are maligning Pakistan; the Army; and you [Army chief],” he claimed. “You need to investigate them,” he added.

The PTI then continued its long march, with an aim to exit Lahore today and reach Kamoke before concluding the day’s demonstrations.