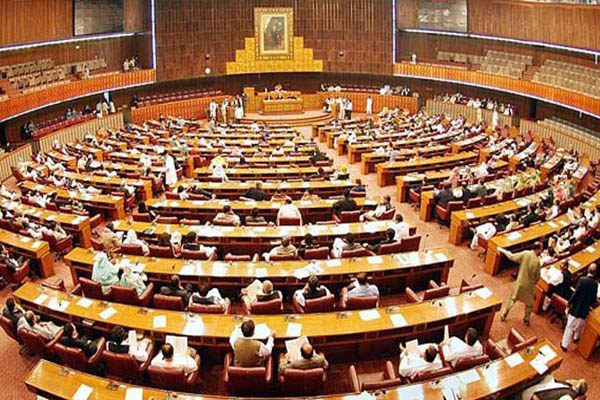 Pakistan Tehreek-e-Insaf (PTI) Chairman Imran Khan’s claims of putting “behind” him allegations of a U.S.-backed regime change conspiracy have provoked backlash from his political rivals, including the prime minister, who maintain he cannot backtrack from his “lies” without accountability.

In an interview with Britain’s Financial Times, Khan said that as far as he was concerned, “it’s over, it’s behind me.” Referring to his earlier claims of the U.S. seeking his ouster, he said the Pakistan he “wants to lead” must have positive ties with everyone, including Washington. The remarks have raised eyebrows in Pakistan, where Khan has been actively campaigning on his claims since being removed as prime minister in April.

Earlier, Information Minister Marriyum Aurangzeb had reacted to Khan’s interview by saying it was “not enough” for him to disassociate from statements that had “spread chaos and lies.” In a posting on Twitter, she said he must be held accountable for using his “false narrative” to describe Parliament, the armed forces, and institutions as “traitors” in multiple public appearances since his ouster.

Similarly, Climate Change Minister Sherry Rehman of the Pakistan Peoples Party (PPP) had also taken to Twitter, describing the PTI chief’s interview as the “mother of all U-Turns.” Questioning who should be held responsible for the damage his narrative had caused to the country’s diplomatic ties, she said this was a serious matter that could not just be dismissed as a “political statement.”

The matter was then taken up in Parliament, with several lawmakers emphasizing that Khan would have to pay a “political price” for his fake “U.S.-backed regime change conspiracy.” Defense Minister Khawaja Asif, speaking on a point of order, said Khan could not abandon his narrative without consequences. “You will have to pay the political price for playing with the honor and prestige of the nation,” he said, adding that Khan should pay “as per the Constitution and law.”

Reiterating allegations of Khan paying a $25,000 salary to a U.S.-based lobbying firm, he said Khan’s remarks had “buried” his narrative of an “imported government” and rendered his entire protest movement and long march pointless. Lamenting that “U-turn Khan” had not stuck to his stance for more than a few months, he said this interview should be taken as a warning by those who had placed their trust in the ousted prime minister.

After Asif, federal minister Javed Latif also addressed the National Assembly on a point of order, urging Speaker Raja Pervaiz Ashraf to issue a ruling barring Khan from speaking against defense institutions. Accusing Khan of making the Army chief’s appointment controversial, he said the House must take notice of such remarks, adding that the PTI chief could not be allowed to “blackmail” institutions.

Latif also reiterated his demands for the federal government to take action against Khan, recalling that even the Army had asked it to act against people defaming institutions with fake accusations.

Also on Monday, Prime Minister Shehbaz Sharif addressed Khan’s interview, saying in a posting on Twitter it had negated the PTI chief’s own conspiracy theory. “[Imran Khan] Niazi’s interview with FT in which he rebutted his foreign conspiracy theory is a reminder of vicious role he played to harm Pakistan’s external relations while pursuing his own petty politics,” he wrote. “Nation is shocked by his deceit and treachery inflicting irreparable damage on Pakistan,” he added.

Just ahead of facing a vote of no-confidence in March, Khan had waved around a piece of paper during a public rally, alleging it contained “proof” of a foreign-backed conspiracy to oust him from power. In a subsequent public address, he had named the foreign country as the U.S. The PTI’s resulting campaign focused on seeking “freedom” from international interference, with “slavery is unacceptable” an oft-heard slogan during its rallies.

Khan’s narrative took a dent when a leaked audio recording, allegedly between him and his then-principal secretary, featured him discussing ways to “play” with the diplomatic cipher that he claims proves a foreign conspiracy. It has also been rejected by the military leadership, which has maintained that it has found no evidence of his allegations. His party, meanwhile, maintains he is not reversing his earlier stance, and is merely redirecting his ire on the “local facilitators” of the “foreign conspiracy.”