In letter, senior judge urges CJP to withdraw the names of junior judges who were already rejected during a JCP meeting on July 28 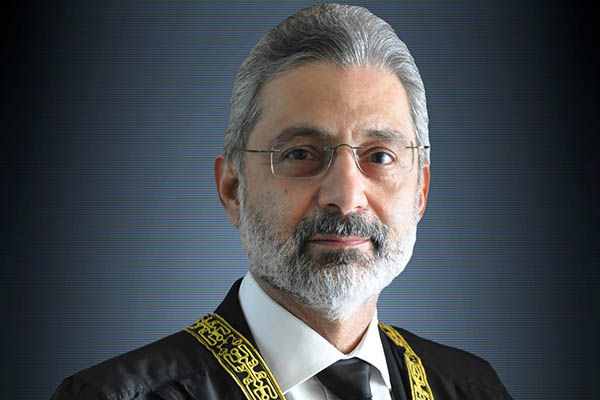 Justice Qazi Faez Isa has, once again, urged Chief Justice of Pakistan (CJP) Umar Ata Bandial to withdraw the names of three junior judges for elevation to the Supreme Court, noting they had already been rejected by the Judicial Commission of Pakistan (JCP) during a meeting on July 28.

“I most humbly request the Honorable Chairman to act constitutionally, legally and morally and withdraw the names of those junior judges who have already been rejected by the JCP,” he wrote in a letter dated Oct. 21 ahead of a meeting of the JCP today (Oct. 24). The latest meeting would consider the elevation of Justices Shahid Waheed of the Lahore High Court; Syed Hasan Azhar Rizvi and Shafi Siddiqui of the Sindh High Court; and Islamabad High Court Chief Justice Athar Minallah to the Supreme Court. Of these, all but Minallah were already rejected by the JCP in July.

Prior to Isa’s letter, the Pakistan Bar Council (PBC), the Supreme Court Bar Association (SCBA) and the Sindh Bar Council (SBC) had already expressed their concern over elevating to the Supreme Court judges who were far below in the seniority list of judges that could be considered by the JCP. In statements, the legal fraternity vowed to challenge any nomination against the principle of seniority if it were approved by the JCP. The letter advised the CJP to only put forward the names of the chief justices of the five high courts or to allow the JCP meeting to determine the nominees prior to deliberating on who should be elevated.

Justice Isa, who would become the Chief Justice of Pakistan after Bandial’s superannuation next year, also reiterated his concern over the recording and release of the previous meeting of the JCP, saying it had undermined the credibility and authority of serving judges of the court. Taking issue with the language of the note announcing today’s JCP meeting, he said it could not be considered to be a “resumption” of the July meeting as three months had already passed. Also, he stressed, the composition of the JCP had changed following one judge retiring and being replaced by Justice Mansoor Ali Shah.

Earlier, the Sindh Bar Council had questioned if the new meeting of the JCP had been called under a “secret deal” with the government, pointing to the re-nomination of judges who had already been rejected. In a statement, it recalled that the attorney general for Pakistan and the law minister had both met the CJP for “several hours” earlier this month, and the contents of that meeting remained confidential. It questioned if the CJP had offered some concessions to the officials in exchange for their support to elevate junior judges to the Supreme Court and vowed to contest any attempts to violate the seniority principle.