‘Lies cannot be Given Free Rein’ 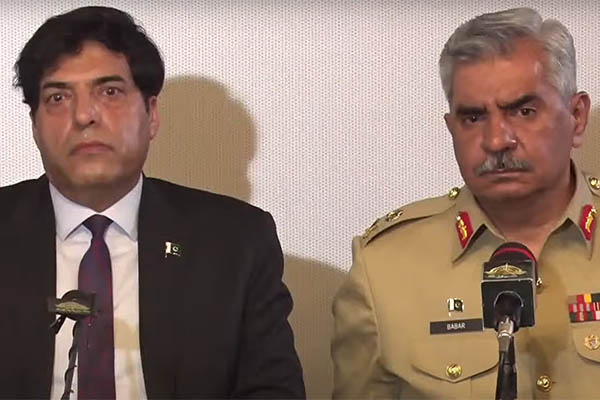 In an unprecedented press conference from Rawalpindi, Inter-Services Public Relations (ISPR) Director-General Maj. Gen. Babar Iftikhar and Inter-Services Intelligence DG Lt. Gen. Nadeem Ahmed Anjum reiterated the military’s desire for a full investigation into the killing of journalist Arshad Sharif and stressed that the armed forces will remain within their constitutional limits.

The DG ISI’s presence at the press conference raised eyebrows, as he has been particularly averse to media coverage of his activities, with press releases going so far as to edit him out of pictures of meetings he attended with government officials. “I know you must be surprised to see me,” he said, explaining he felt the need to directly address media because “we cannot allow lies to be given free reins.” Young minds, he emphasized, must be informed that the narrative they are being fed is “far removed from the truth.”

The statement appeared to be a reference to the Pakistan Tehreek-e-Insaf (PTI) and its chief, Imran Khan, who have repeatedly hit out at the Army’s alleged role in Pakistan’s politics. Since Khan’s ouster as the prime minister through a vote of no-confidence, he has repeatedly described—without directly naming anyone—various senior military officials of being “traitors” and lashed out at the organization’s stated aim of remaining neutral in its dealings with rival political parties.

“The Pakistan Army today is apolitical and will perform its duties within the ambit of the Constitution of Pakistan,” emphasized Maj. Gen. Iftikhar. “This is a collective decision taken by the rank and file of the Pakistan Army,” he said, adding that the armed forces would not interfere in the internal affairs of the country, nor choose any sides or indulge in politics. The ISI chief, similarly, said Pakistan faces no real external threats, but is facing “internal threats” that must be thwarted.

Recalling the social media against officers martyred in a helicopter crash at Lasbela, the ISI chief recalled that they were mocked. He said it was highly condemnable to speak without proof, stressing words like “neutral and janwar (animal)” were meant to illustrate that the institution was indulging in sedition. He said these words were used against the Army because it refused to bend to an “unconstitutional and illegal act.”

Claiming that the “establishment” had decided to restrict itself to its constitutional role last year, he said this decision was motivated by intense internal discussions within the Army. The people who were part of this decision, he claimed, included those who would be leading the Army for the next 15-20 years.

He said there had been a “lot of pressure” for intervention in March but the Army chief had refused to act outside the military’s constitutional role. Gen. Bajwa, he said, could have spent the last months of his tenure “comfortably” had sacrificed in the country’s interest, with his family also being abused.

At one point, Lt. Gen. Anjum alleged that Gen. Bajwa had been offered an “unlimited” extension to his tenure as Army chief by the government in March. “It was made in front of me. He rejected it because he wanted the institution to move forward from a controversial role to a constitutional role,” he said.

In an apparent reference to speeches by Imran Khan, he said citizens had the right to their opinion, but why would you “praise him [Bajwa] so much” if you saw him as a traitor. “If you see him as a traitor, then why do you meet him through the back door? Don’t do this where you meet quietly at night through the back door and express your unconstitutional wishes but call [Gen. Bajwa] a traitor in broad daylight. That’s a big contradiction between your words and your actions,” he said, adding this offer had come when the incumbent government when the no-confidence motion was at its peak.

Regretting that politics of hatred had created instability, he lamented this was dividing society. Recalling when he first took office, he said he had been asked by some—a seeming reference to the PTI-led government—what he believed was the biggest issue facing Pakistan. “I said it was our economic woes. But those who asked the question did not agree. In their view, the opposition was the biggest problem,” he said, stressing political intolerance causes instability. “When we go through the back door, it causes anarchy in the country,” he added.

To a question on social media backlash over the press conference, Lt. Gen. Anjum said this did not worry him. “There were campaigns against me in March on social media. I got a call from the agency that a campaign was underway against me. I told them get in touch when the retweets exceed eight thousand million. Before that, I don’t care about myself,” he added.

Commencing the press conference, the military spokesman said the purpose of the media interaction was to address the killing of journalist Arshad Sharif in Kenya and the circumstances surrounding it. He said the talk was aimed at allowing the public to differentiate between facts, fictions and opinions, adding that Prime Minister Shehbaz Sharif had been “specially informed” about the importance of this press conference.

Referring to social media discussions—primarily from within the PTI—that have sought to blame Sharif’s killing on the military establishment, the DG ISPR lamented that the Army chief had also been targeted and criticized. “An attempt was made to create a divide in society,” he said, stressing that Sharif’s death was an “unfortunate incident.” Describing him as an “icon of journalism in Pakistan,” he noted that Sharif hailed from a military family and had felt the pain of martyred officers.

Referring to Khan’s narrative of a diplomatic cipher, he said Sharif had conducted several programs on the issue and had met Khan in this regard. “As a result, it was stated that he was shown meeting minutes and the cipher,” he said, adding that facts behind the cipher and Sharif’s death must be determined.

Reiterating that the cipher’s contents had been communicated to then-prime minister Khan by the Army chief during a March 11 meeting, he said the PTI chief had described it as not a “big” thing. “It was surprising for us when on March 27 a piece of paper was waved and an attempt was made to build a narrative that was far from reality,” he said, describing the PTI’s “foreign conspiracy” narrative as “baseless and unfounded.” He reiterated that the National Security Committee had found no proof of the alleged foreign conspiracy. “This is all part of the record. We wanted to bring this to the public. And we left the decision to the-then government,” he said, regretting the government had decided against this for political mileage.

Noting that several journalists were fed this same narrative, he said ARY News had played the role of “spin doctor” during the “media trial” targeting the Army and promoting a false narrative. Referring to Khan’s speeches, he said the Army was targeted for not intervening in domestic politics. “The words ‘neutral’ and ‘apolitical’ were turned into abuse,” he said. “To all this baseless narrative, the Army chief and the institution showed restraint and we tried our level best that politicians sit together to resolve their issues,” he added.

Recalling that Sharif had made similar comments about the Army, he said this had not caused any “negative” sentiments. However, he stressed, a key question was how the journalist had been forced to leave Pakistan. Referring to a “threat” letter issued by the Khyber-Pakhtunkhwa government on Aug. 5, he said this was produced on the directives of Chief Minister Mahmood Khan and alleged a splinter group of the Tehreek-e-Taliban Pakistan (TTP) had targeted Sharif. “No information about this was shared with the institutions,” he said, adding it showed the threat alert was issued with an aim to force Sharif to leave the country.

“There was reports that he [Sharif] did not want to leave the country but he kept being reminded that he was facing a threat,” he said, adding that after PTI leader Shahbaz Gill was arrested on Aug. 9 over his remarks to ARY News, the channel’s head Ammad Yousuf had been told by ARY CEO Salman Iqbal to ensure Sharif was sent abroad as soon as possible. The ARY Group, he said, had arranged Sharif’s travel to Dubai, adding he had been provided complete protocol by the KP government.

“Arshad remained in the U.A.E. while he had a valid visa. He left for Kenya when his visa for Dubai expired,” he said, rubbishing the perception that the journalist had been “forced” to leave Dubai. He said it should be determined who processed the journalist’s documents in the U.A.E., who looked after his accommodation, who forced him to not return to Pakistan and who assured him of safety in Kenya.

“Kenyan police accepted their mistake and it has to be examined whether this is a case of mistaken identity or one of targeted killing. There are several questions that have to be answered,” he said, reiterating that the military wanted a “transparent and fair probe.” He said the name of the ARY CEO surfaced repeatedly in Sharif’s case. “He should be brought back to Pakistan and made part of the probe,” he said, adding that people should question who benefitted from Sharif’s killing.

“It’s your [journalists’] responsibility now to unearth the facts and bring them to light,” he said. “We have to wait for the report from the inquiry commission. Until the report is released, it is not appropriate to make allegations,” he added.

To a question, the ISI chief said he did not have any reports of threats to Sharif’s life in Pakistan. “When he went abroad, he was still in contact [with the establishment],” he said, adding that he was aware of some information that he did not feel comfortable sharing until more details emerged. “Perhaps we and the government are not fully convinced” of the Kenyan police’s claims,” he said. “That’s why the government has formed a team that will head to Kenya,” he said, adding that an officer of the ISI had been removed from the probe to ensure fairness. “Whatever conclusion is reached, the DG ISPR will inform you about it,” he added.

To another question, he said, if the establishment had threatened Sharif and did not want him to leave the country, he would not have been able to do so. “We had no personal enmity with him,” he stressed. “He had old contacts with our officers. Other journalists also say they receive calls. This is a lie,” he said, adding that there were apps that allowed the caller to conceal their identity.

To a question on the lack of any journalist representatives in the investigation into Sharif’s killing, the DG ISPR said he felt they should be included in the teams probing the incident.