Long March to Resume after Imran Khan Recovers from Injury

In video statement, PTI chief claims he was already aware of assassination threat and reiterates demand for ouster of P.M., interior minister, and Army official 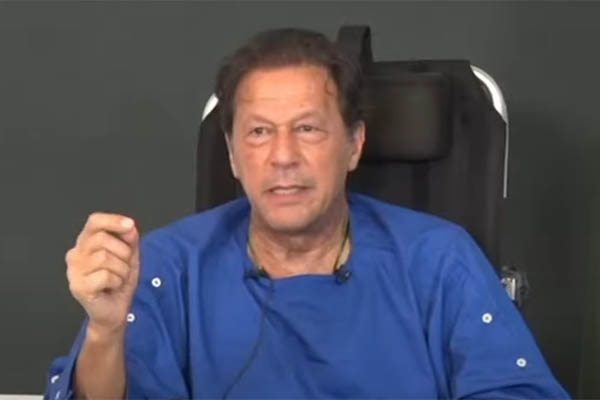 Screengrab of the PTI chief’s speech

In his first speech since being shot and injured in an attempted assassination, Pakistan Tehreek-e-Insaf (PTI) chief Imran Khan on Friday night called on his supporters to continue protesting nationwide for the removal of alleged “masterminds” of the assault until his health had recovered and the long march could resume.

At the outset of his speech, Khan summarized the events of the past six months from his perspective, reiterating his debunked claims of a foreign regime change conspiracy and heralding his popularity among the public who had not accepted his removal from office. “People voted for me because they were fed up of them [rival political parties],” he said, claiming the establishment had then “decided” to bring them back because it was used to “imposing” decisions on the public. “This time, they were shocked that the people did not go along with those stealing for the past 40 years,” he claimed.

Ignoring the years spent on the “same page” with the establishment or the efforts—partly acknowledged by the DG ISPR in a recent press conference—expended to bring him to power, Khan claimed his party had not created by the establishment unlike his rivals. Accusing the agencies of not allowing the democratic process to continue, he reiterated allegations of rigging in by-elections that were won by the PTI.

“This was followed by more pressure and threats,” he alleged, accusing Inter-Services Intelligence (ISI) Director-General of Counter-Intelligence Maj. Gen. Faisal Naseer of being tasked with tackling the PTI. Alleging that this had resulted in harassment of media “favoring” the PTI, he claimed the party’s lawmakers were threatened with blackmail through inappropriate videos. Alleging that “everyone” knew who had killed journalist Arshad Sharif—who was allegedly shot dead by Kenyan police—the PTI chief maintained he knew who was after the deceased but stopped shy of identifying anyone.

According to Khan, the Election Commission of Pakistan (ECP) was “used” to disqualify him in the Toshakhana reference to create a “level-playing field” on the orders of PMLN leader Nawaz Sharif. “They’re comparing me with someone who has billions of properties abroad,” he alleged, reiterating that the PTI would appeal the ECP’s decision to disqualify him, as he once again described Chief Election Commissioner Sikandar Sultan Raja as a “servant” of the PMLN.

The PTI chief then reiterated his claims of four people plotting to kill him, adding that he had named them in a previously recorded video that would only be released after his death. Claiming that he was aware of plots against him because of sympathetic officials in agencies from his time in power, he alleged that “they”—an apparent reference to the ruling coalition and the establishment—had planned to assassinate him through methods similar to those employed against [Punjab governor] Salmaan Taseer.

“They tried to accuse me of blasphemy to turn the public against me,” he claimed, adding that the latest plot did not involve the four unnamed individuals. This time, he claimed, Prime Minister Shehbaz Sharif, Interior Minister Rana Sanaullah, and Maj. Gen. Faisal Naseer had plotted to assassinate him because they “feared” the crowds gathering for his long march.

Detailing his perspective on the shooting, Khan claimed a burst of bullets was fired at his convoy, resulting in him falling atop the container. “Then another burst of bullets was fired from the opposite side,” he claimed, alleging multiple shooters. Referring to the confession videos of the detained suspect, the PTI chief claimed it was untrue that the shooter had been an extremist. “This was all planned. We have tried to lodge a first information report but it is not being registered by the police,” he alleged, claiming there was pressure, though he did not clarify from where. He also did not specify what was preventing the Punjab police under the control of his party’s coalition government in the province from acting on his demands.

Because of this, he said, he was calling on all his supporters to protest nationwide until the removal of the prime minister, the interior minister and the Army official from their posts. “No investigation can proceed so long as they are in power,” he claimed, though did not offer any evidence of any of his allegations. “I had already learned that there was a plan to kill me somewhere between Wazirabad and Gujrat,” he claimed, without detailing by security had not been beefed up in the face of this viable threat.

Prior to Khan’s address, PTI’s Dr. Faisal Sultan, who has been treating the party chief, briefed the public on his injuries. According to the information provided, Khan’s legs were shot four times—though it was unclear if it was with bullets or shrapnel—and has a fracture in one leg.