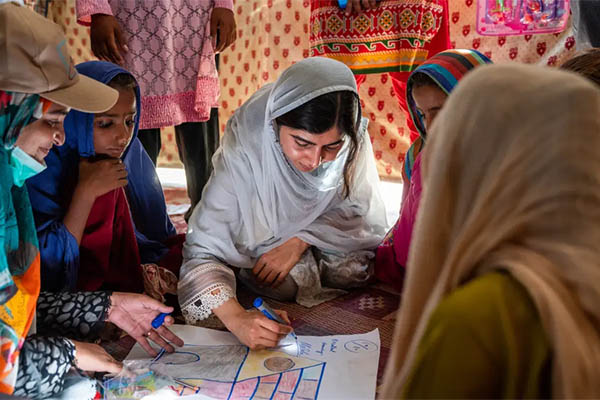 Urging authorities in Pakistan to focus on mitigating education loss in their response plans for flood-hit regions, Nobel laureate Malala Yousafzai has lamented that millions of Pakistanis are suffering the consequences of climate inaction and need urgent support to rebuild.

During a two-day visit to flood-hit areas of Sindh, where she was accompanied by her father and Malala Fund co-founder Ziauddin, she met with flood-affected women, girls and their families and spoke with them about their experiences and prevailing challenges. According to a statement issued by the Malala Fund, their visit was aimed at better understanding girls’ experiences during this year’s floods, refocusing international attention on the growing humanitarian crisis, and amplifying calls for emergency aid.

It said the father and daughter had visited relief sites in Dadu and met with flood-affected women, girls and their families. One 16-year-old, it said, had told them she wanted to return to school but could not pass the floodwaters. “If there was less water, I’d even go through it. Now we are hearing that the flood waters will stay for five months,” she was quoted as saying of the floods, which have disrupted learning for nearly 3.5 million children and destroyed almost half the schools in Sindh province.

According to the statement, Malala and Ziauddin met with Sindh government officials in Karachi to discuss the challenges facing education in hard-hit areas. “She urged leaders in Sindh and across the country to focus on mitigating education loss in their response plans, including working to reinstate schools as learning centers and providing incentives for girls to return to school after the crisis,” it said, noting that the Malala Fund was also calling for urgent global and regional action to ensure impacted students received the support and resources needed to return to school. Beyond the Malala Fund’s initial emergency relief grant, it said, a further $700,000 had been committed to organizations in Pakistan to support flood relief.

“The scale of the destruction is astounding and the psychosocial and economic impact on the lives of people, especially women and girls cannot be overstated,” said Malala. “Millions of Pakistanis are suffering the consequences of climate inaction. World leaders must step up, accelerate their response plans and mobilize funds needed to help Pakistan rebuild and support impacted populations,” she added. Her father, Ziauddin, likewise said that Pakistan already had the second highest rate of out-of-school students with nearly 22 million children facing barriers to education. “Without urgent action to undo the devastation caused by these floods, the education of 12 million more children is at risk. Pakistan is my home—and I want to see every child able to access the education they deserve,” he added.

Full Board Review to Determine Fate of ‘Joyland’