In press conference, PMLN leader claims sole aim of the march is to create controversy over appointment of next Army chief 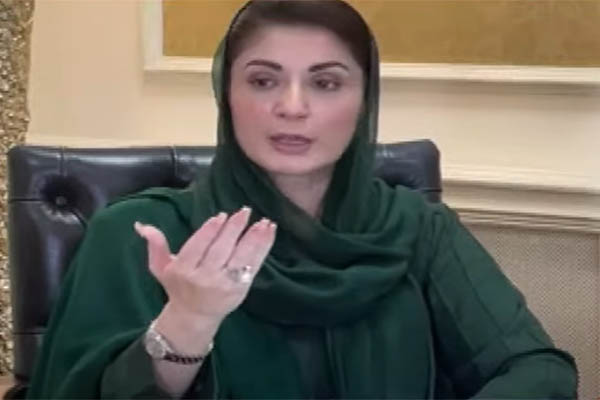 Pakistan Muslim League (Nawaz) Vice President Maryam Nawaz on Tuesday derided PTI chief Imran Khan’s “part-time” long march, as she accused him of “flawed” politics based on his demands for the security establishment to intervene and force early elections.

“What kind of part-time long march starts and ends within two hours and has yet to even leave the vicinity of Lahore after five days,” she said during a press conference from London, where she has been since last month after being acquitted in the Avenfield reference. “Now, we are hearing reports that it [march] will take 8-10 more days to reach Islamabad,” she said, adding that at this pace, Khan would be lucky to reach Islamabad by the end of November.

Offering her condolences for the death of journalist Sadaf Naeem—who was crushed under Khan’s container while covering the long march for Channel 5—Nawaz said the incident had prompted her to think about the purpose of the PTI’s long march. “A precious life was lost. A mother of young children passed away while covering the long march,” she said, lamenting that Khan’s demands did not match those of someone who had been the prime minister for the past four years.

“Look at any area; economy, foreign relations, foreign policy, or governance, Imran Khan destroyed all of them during his tenure,” she claimed, adding that the march would make more sense if it had been led by someone who had never been in power. Blaming the PTI-led government for record inflation, she questioned why Khan did not comment on his role in the prevailing economic crisis.

Alleging that the Punjab Police deployed to provide security for Khan outnumbered the actual participants of the march, she lamented that millions of taxpayers’ funds were being used to secure an “aimless” march with no national agenda.

Claiming that the PTI chief’s narrative of a “foreign conspiracy” had been fully exposed, she said this was why the public was not responding to Khan’s march with fervor. This, she claimed, was the PTI’s last plan. “Prior to that, they continued building the narrative of a foreign conspiracy to mount pressure on the government and spewed many lies,” she said. “These were such serious lies that DG ISI [ISI chief Lt. Gen. Nadeem Ahmed Anjum] had to come out and address a press conference,” she said, noting that the nation should understand the seriousness of the situation when a man who didn’t even permit his photos to be released to media had to break his silence.

Maintaining that the only real point of the PTI’s long march was to create controversy about the appointment of the next Army Chief, Nawaz claimed this scheme would fail. “Khan should know that the appointment of the Army chief is rightfully, constitutionally, and legally the right of Prime Minister Shehbaz Sharif. God willing, the process will be carried out amicably in a good environment,” she said, reiterating that Imran Khan was not a stakeholder in the process.

Deriding Khan’s anti-establishment rhetoric, Maryam questioned if his claims of the establishment informing him of the corruption of government leaders also extended to it encouraging him to not declaring proceeds from sales of Toshakhana gifts. “Did the establishment tell you to siphon off Rs. 50 billion? Did they tell you to make Pinky Peerni [Bushra Bibi] your frontwoman to carry out massive corruption?” she questioned, claiming it was clear he had lost the establishment’s support based on the number of political transplants who were nowhere to be seen during the long march.

Urging the judiciary to take notice of Khan’s “constant” lies about not being disqualified by the Election Commission of Pakistan (ECP), she claimed another scandal would soon be exposed. “Pakistan had received a diamond set by Graff, one of the leading diamond-manufacturing companies of the world. Khan bought it from the Toshakhana for Rs. 2 million and sold it in Dubai for Rs. 22 million,” she alleged, claiming further than Khan had “looted” around Rs. 50 million from the Toshakhana.

The PMLN leader also discussed the PTI chief’s victories in recent by-elections across Pakistan, claiming he was merely securing wins on constituencies that his party had vacated. Responding to Khan’s challenge to Nawaz Sharif, she said he should wait till the PMLN leader had been granted a “level-playing field.”

Khan, she claimed, would stand exposed when Nawaz would once again get a chance to step onto the electoral field. “Insha Allah [Nawaz Sharif will] return after ridding himself of all the baseless allegations Khan levelled against him,” she said, claiming this would happen soon.