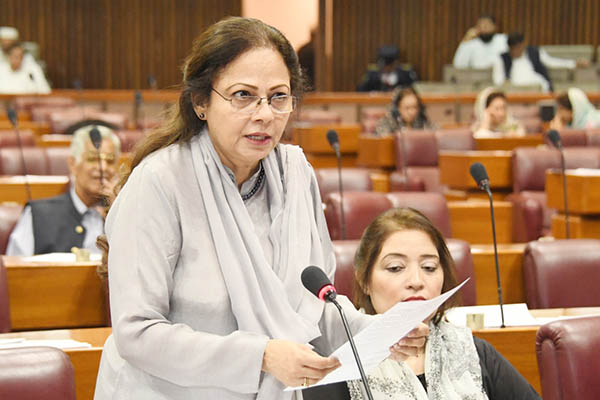 There is presently no risk of Pakistan defaulting, Minister of State for Finance Aisha Ghaus Pasha told the National Assembly on Friday, stressing that the revival of the International Monetary Fund (IMF) program had led to an increase in exports and remittances.

Addressing the House during Question Hour, she said recent reforms had also prompted investors to express interest in investing in the country. Meanwhile, she noted, the global community has shown an intent to help Pakistan recover from the devastation caused by this year’s floods.

To another question, the minister said roughly 50 percent of Pakistan’s economy remained undocumented and the Finance Ministry was framing policies to enhance the size of the formal economy by bringing potential taxpayers into the tax net. She said the Finance Ministry aims to integrate the entire supply chain—from import to retain—with the Federal Bureau of Revenue’s system to ensure documentation. She emphasized that every Pakistani should pay due taxes to ensure funding for health, education, transport, defense and other sectors.

On the recent price hike, Pasha blamed “internal and external” factors. She said the government was taking steps to counter inflation on priority.

Separately, in a written reply, Finance Minister Ishaq Dar informed the House that the country’s foreign exchange reserves stood at $13,721.9 million on Nov. 4, with the State Bank of Pakistan holding $7,957.9 million and commercial banks $5,764 million.

On matters of the country’s foreign debt, Economic Affairs Minister Ayaz Sadiq said the Pakistan Tehreek-e-Insaf-led government had taken loans worth $47,105.85 million between August 2018 and April 2022. The incumbent government, he said, had added $5,665.83 million in foreign loans and aid between April 11 and Sept. 30.

Commerce and Trade Minister Naveed Qamar, meanwhile, told the House that Pakistan could not pursue “full-fledged” trade with neighboring Iran due to U.S. sanctions on the country. He said talks on expanding trade would commence after the U.S. had lifted its sanctions on Tehran.

On damages caused by floods, Minister for Parliamentary Affairs Murtaza Javed Abbasi said surveys had been completed in Punjab and Gilgit-Baltistan while the remaining affected areas would be fully reviewed by the end of this month.

Also on Friday, the National Assembly passed a resolution on safeguarding the rights of all children, as enshrined in the 1973 Constitution, and under the U.N. Convention on Rights of Child. The resolution recognized the rights of every child, as well as mothers, and the need for ensuring best-possible infant care and a safe environment for all children.