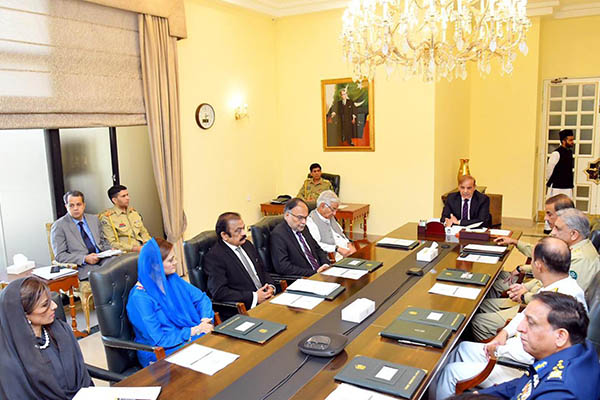 File photo of a meeting of the National Security Committee. Courtesy PID

Pakistan’s National Security Committee (NSC) on Friday reviewed the country’s security situation following a militant attack on a school van in Swat that left its driver dead and a student injured.

Chaired by Prime Minister Shehbaz Sharif, the NSC meeting took place at the Prime Minister’s Office, with relevant federal ministers, lawmakers, services chiefs, and heads of intelligence agencies attending—minus the PTI-led government of Khyber-Pakhtunkwha, which chose not to participate. A statement issued by the Prime Minister’s Office after the meeting said the participants had been briefed on the security situation, with all present vowing to ensure that the rule of law would be strictly implemented against anyone involved in the bloodshed of innocents.

“Our citizens rendered unprecedented sacrifices along with the armed forces and played a historic role in the war against terrorism,” read the statement, emphasizing that the nation and state were united in desiring protection for the lives and properties of people; the geographical integrity of Pakistan; and the implementation of rule of law.

The forum, per the statement, decided to constitute an apex committee headed by P.M. Sharif and revive the National Counter-terrorism Authority (NACTA) to develop cooperation between all provincial counter-terrorism departments and prevent any resurgence of terrorism in the country. It also approved stringent measures to ensure the security of China-Pakistan Economic Corridor (CPEC) projects.

According to the statement, NACTA would be tasked with upgrading the anti-terrorism system and equipping authorities with the latest technology. The meeting’s participants pledged to ensure necessary resources to achieve this and praised the armed forces, Rangers, police, and personnel from other law enforcement agencies for sacrificing their lives in the line of duty.

Earlier, prior to the NSC meeting, Defense Minister Khawaja Asif told an event that talks with the banned Tehreek-e-Taliban Pakistan (TTP) had yet to yield any concrete outcomes, but the armed forces were fully capable of containing any threat to national security. Lamenting that the PTI-led government in KP had been unable to curb the re-emergence of terrorists, he praised the people of Swat for coming out on the streets to demand their rights.

Urging the provincial government to wake up to the situation, he said the federal government would not ignore the looming threat.

Residents of Swat have been protesting for several months against the resurgence of terrorism in the region, with thousands demonstrating on the streets of Mingora earlier this week after the killing of the school van driver.