A look back at the events leading up to, and immediately following, the U.S. raid that led to the Al Qaeda chief’s killing 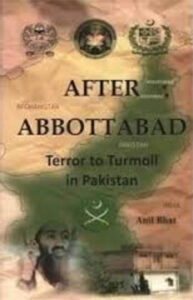 In After Abbottabad: Terror to Turmoil in Pakistan (Pentagon Press, 2012), author Anil Bhat—a former Indian Army spokesman—reiterates claims that Al Qaeda leader Osama bin Laden’s presence in Abbottabad cannot have been possible without the knowledge of the country’s government even though there has been no solid evidence of this in the past 11 years. However, the book also offers insight into the circumstances that led to bin Laden setting up a compound near the Pakistan Military Academy in Abbottabad, alleging a network of safe houses that the slain militant used while on the run.

According to Bhat, citing testimony of bin Laden’s youngest wife, the residence in Abbottabad’s Haripur was one of five safe houses used by the slain Al Qaeda leader while on the run in Pakistan. Amal Ahmed Abdel-Fatah al-Sada, a 30-year-old Yemeni who was deported to Saudi Arabia in 2012 after several months in Pakistani custody, was believed to be bin Laden’s favorite wife. She traveled with him when he fled Afghanistan’s Tora Bora mountain range in 2001 and was shot in the leg while trying to resist U.S. Navy SEALs who overran the Abbottabad compound, killing bin Laden and four other people, in May 2011.

Bin Laden’s compound, known locally as the Waziristan Haveli, was a large, upper-class house within a walled compound located at the end of a dirt road 1,300 meters southwest of the Pakistan Military Academy in Abbottabad, Khyber-Pakhtunkhwa, a suburb housing many retired military officers. Bin Laden was reported to have evaded capture by living in a section of the house for at least five years, having no Internet or phone connection, and hiding away from the public, who were unaware of his presence.

Completed in 2005, the main buildings in the compound straddled a 3,500-square-meter plot of land, much larger than those of nearby houses. Around its perimeter ran 3.7-to-5.5-meter high concrete walls topped with barbed wire, and there were two security gates. The compound had very few windows. Little more than five years old, the compound’s ramshackle buildings were badly in need of repainting in 2011. While the grounds contained a well-kept vegetable garden, rabbits, some 100 chickens and a cow, the house itself did not stand out architecturally from others in the neighborhood, except for its size and exaggerated security measures. Photographs of the house’s interior showed excessive clutter and modest furnishings. After the American mission, there was extensive interest in and reporting about the compound and its design; to date, years after its demolition, the Pakistani government has yet to respond to any allegations as to who built the structure.

In November 2017, the CIA publicly released the contents of a cache of nearly 470,000 computer files discovered on 183 separate devices at the Abbottabad compound, giving the world a glimpse into the home life of the militant leader, his family, and his closest allies. Among the files was a diary of bin Laden’s movements and thoughts regarding the state of Al Qaeda; several videos of beheadings; a 19-page report about Al Qaeda’s links to Iran; and a video of Osama bin Laden’s son, Hamza, at his wedding (the first images of Hamza since his childhood). There were also a number of U.S.-produced documentaries about bin Laden, including Morgan Spurlock’s Where in the World is Osama Bin Laden?, and CNN’s In the Footsteps of bin Laden.

But also found in the cache was a great deal of typical internet-browsing and pirated content, including home videos, cat videos, clip art, a video called “HORSE DANCE,” wildlife documentaries, a copy of the viral “Charlie Bit My Finger” video, several animated shows and films, and copies of various video games. There were also, reportedly, several pornographic video games and videos, although the CIA has not released specifics and withheld certain titles, citing copyright concerns.

After the September 11, 2001 attacks, the U.S. searched for bin Laden for nearly 10 years. By tracking his courier, Abu Ahmed al-Kuwaiti, to the compound, officials surmised that bin Laden was in hiding there. During the raid on May 2, 2011, 24 members of the United States Naval Special Warfare Development Group arrived by helicopter, breached a wall using explosives, and entered the compound in search of the terrorist, eventually finding and shooting him dead.

A week after the U.S. raid, President Barack Obama reportedly told a media outlet that bin Laden had a support network in Pakistan and it must be investigated how he evaded capture for so many years. Pakistan responded by announcing the formation of a committee to investigate bin Laden’s presence in the country as well as the circumstances surrounding the U.S. raid. Soon after it began its work, the head of the committee said he was sure that security forces were not hiding bin Laden. Committee spokesman, Col. (retd.) Mohammad Irfan Naziri, reportedly said that its findings were being written but they ought not to be released publicly. “We’re disappointed,” said a US official about the investigation. “They promised to do it, but they haven’t yet.”

According to the 9/11 Commission Report, almost all of the attackers had spent time in Karachi prior to traveling to Afghanistan to meet Osama bin Laden. On Sept. 11, 2001, the hijackers took control of four airplanes and targeted the World Trade Center in New York, the Pentagon near Washington, D.C., and the United States Capitol. Two planes hit the World Trade Center; one hit the Pentagon; while the third never arrived at its target. Almost 3,000 people died, making it the deadliest terrorist attack in U.S. history.

The report claims that Khalid Sheikh Mohammed envisioned hijacking 10 planes on both the East and West coasts, with nine of them being used to crash into the World Trade Center; the Pentagon; the White House; the Sears Tower in Los Angeles; the Space Needle in Seattle; and the Empire State Building. It claimed KSM had wanted to personally hijack the 10th plane, kill all the adult males on board, land the plane in the U.S., make a political speech, and then free the women and children.

Even prior to the 9/11 attacks, there were several connections between Abbottabad, Al Qaeda and Osama bin Laden. On July 21, 2001, the Afghan Taliban’s Ambassador to Pakistan, Mullah Abdul Salam Zaeef, categorically told a three-day training convention in Abbottabad that “the Taliban would never hand over Osama bin Laden to the Americans for any so-called trial as it would be tantamount to acceding that the Muslims have no credible system of Justice in Islam.”

In the days following the 9/11 attacks, U.S. Marine Lt. Col. Asad Khan, born into a family in Abbottabad that founded the country’s first commercial poultry farm in the city, became one of a handful of Afghan and Pakistani Americans who contributed to U.S. intelligence operations by working on the frontlines as interpreter, interrogator and liaison officer. It is ironic that it was in the town of his ancestors that the Americans eventually did find bin Laden.

The 9/11 Commission Report claims the “9/11 plotters eventually spent somewhere between $400,000 and $500,000 to plan and conduct their attack but the origin of the funds remains unknown.” It noted: “We have seen no evidence that any foreign government—or foreign government official—supplied any funding.”

On Sept. 28, 2001, India’s Research and Analysis Wing provided the U.S. with a list of 71 Al Qaeda training camps spread across Pakistan, from Abbottabad to Peshawar to Quetta and Warsak. Subsequently, the Christian Science Monitor published the results of an investigation in which it alleged that “Al Qaeda and an array of militant affiliate groups” were operating staff offices near the Karakoram Highway from Abbottabad along the western perimeter of Kashmir—with the tacit approval of Pakistani intelligence.

In June 2004, Pakistani intelligence agents killed an Al Qaeda suspect as three others fled in a car in Abbottabad as part of a major Pakistani demonstration to “flush out Al Qaeda suspects and their local supporters from hideouts in a remote region near Afghanistan” that left 72 people dead, including 55 terrorists. In response to the October 2005 Kashmir earthquake and in a “desire to bolster Pakistani President Pervez Musharraf when his help was badly needed in hunting down Osama bin Laden and repressing Islamic radicals, the United States provided an initial contribution of $50 million to Pakistan that paid for relief efforts” in locations such as Abbottabad’s Ayub Medical Complex, which received an estimated 1,000 patients directly after the earthquake and is located 3.2 kilometers from Osama bin Laden’s hideout.

Bin Laden’s widow Amal has accused Khairiah—another of his wives—of betraying the militant. During interrogation, she claimed that Khairiah’s escape to Saudi Arabia and return to bin Laden in Pakistan had betrayed the family’s location. Reportedly, the two widows quarreled during their time in Pakistani custody, requiring security guards to pry them apart.

Amal, per the book, has alleged a conspiracy between Ayman al-Zawahiri and Khairiah for bin Laden’s killing. There have also been rumors about bin Laden’s state of mind and some hushed references to a degenerative disease. While it can never be proven if Zawahiri sold out his leader to take over his position, it is possible that he got tired of being sidelined. The truth lies hidden in the many lies that have come forth after the death of bin Laden.