Latest U.N. situation report says residents of Punjab and Khyber-Pakhtunkhwa have started to return to areas where waters are receding 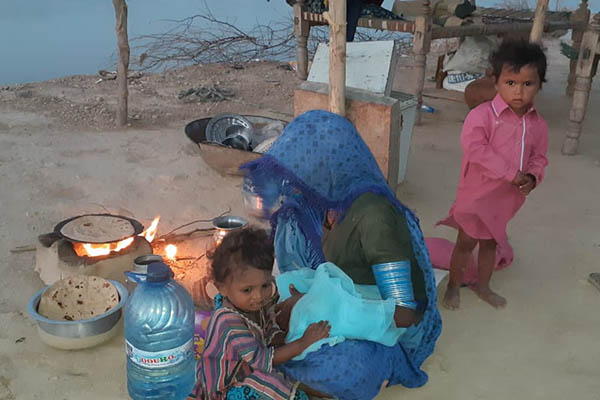 A woman takes care of her newborn child in Johi, Dadu. Photo by Mashooque Birhmani

Over 7 million women and children in flood-hit regions of Pakistan still require immediate access to nutrition services, while around 5.5 million have no access to safe drinking water, according to the latest situation report issued by the U.N. Office for the Coordination of Humanitarian Affairs (UNOCHA).

Warning that growing cases of water-borne and vector-borne diseases were a particular concern in Sindh and Balochistan, where standing water remains, the report said the health situation was worsened further by a lack of adequate sanitation facilities. “Large parts of Sindh remain flooded, with access continuing to be a challenge in inundated areas,” it said, stressing that children were most at risk of suffering the consequences of deteriorating health and sanitary conditions. According to the report, almost 10 million children require immediate life-saving support, including 4 million who lack access to health services, and 7.6 million who are being exposed to protection risks.

Overall, said the report, 20.6 million people still require humanitarian assistance, including around 8.2 million people in flood-affected areas who need urgent health services. It said initial needs assessments in Sindh, Punjab and Khyber-Pakhtunkhwa had found the biggest concerns were food, water and sanitation, health, and shelter. However, it noted, with the receding of waters in several parts of the country, displaced people had started to return to their places of origin—or close to them—especially in Punjab and Khyber-Pakhtunkhwa.

“During the last weeks receding waters were observed, particularly in affected areas of Sindh and Balochistan. In Sindh, water is receding in the districts of Kashmore, Kandhkot, Larkana, Ghotki, Sukkur, Tando Allahyar, Shaheed Benazirabad, Tando Muhammad Khan, Umerkot and Sanghar,” it said, adding that satellite data showed flood waters were decreasing with approximately 300 km2 in Balochistan, 900 km2 in Punjab and 4,000 km2 in Sindh. “As the winter season approaches, the population will be severely affected by the harsh weather conditions in a few weeks, requiring adequate shelter and non-food items such as tents and blankets,” it added.

According to the report, the floods have significantly aggravated food insecurity and malnutrition. “An estimated 14.6 million people require emergency food assistance from December through March 2023, representing an increase of more than 100 percent of the pre-flood estimate,” it said. In addition, it said, rising inflation and significant damage to irrigation systems were expected to deteriorate the food security situation. “According to the Food and Agriculture Organization, the price of wheat and other basic food items reached near-record levels in August 2022. With the loss of livelihoods and income, families are resorting to negative coping strategies,” it warned, noting some 31 percent of livestock holders had lost at least one animal due to floods, with the highest proportion in Sindh (44 percent) followed by Punjab (35 percent) and Khyber-Pakhtunkhwa (25 percent). “Floods damaged an additional 70 percent of crops/vegetable areas and around 30 percent of orchard areas in affected districts,” it added.

Thus far, the NDMA has recorded over 1,718 deaths and more than 12,800 injuries since this year’s rains started in mid-June. Additionally, more than 2.1 million houses have been damaged or destroyed, and nearly 8 million people are reportedly displaced, including some 644,000 people living in relief camps.