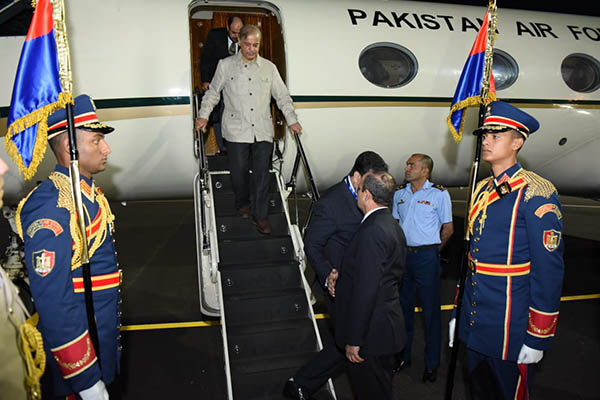 According to a statement issued by the Prime Minister’s Office, the premier was received at the Egyptian city’s international airport by senior Egyptian officials and officials of the Pakistan Embassy. The two-day summit, which formally begins on Monday (today), is part of the 27th U.N. Climate Change Conference (COP27). Its timing is particularly important to Pakistan, which is still reeling from the devastation caused by the climate-change induced floods from earlier this year.

In remarks on Twitter prior to his departure for Egypt, the prime minister reiterated warnings that it would be “criminal” for the global community to turn a blind eye to the lethal effects of climate change. He also, once again, called for “climate justice” for the developing world, stressing that richer states should financially support their poorer counterparts in countering the conditions that worsen climate change.

Referring to a Post-Disaster Needs Assessment prepared by the Planning Minister, Sharif warned that Pakistan’s recovery from this year’s floods could be impacted by “public debt, rising international energy and food prices, and lack of access to adaption funds.”

According to the Prime Minister’s Office, the prime minister would co-chair, along with his Norwegian counterpart, a roundtable discussion on “Climate Change and the Sustainability of Vulnerable Communities” on Nov. 8 as part of his engagements during COP27. He would also attend other high-level events as a speaker, including the U.N. secretary general’s roundtable to launch the “Early Warning Systems for Executive Action Plan” and the “Middle East Green Initiative Summit” on Nov. 7.

Sharif would also hold bilateral meetings with several world leaders on the margins of the summit.

The annual COP27 conference occurs at a particularly important time for Pakistan, as this year’s floods have impacted over 33 million people and left a third of the country underwater. The Foreign Office said that as a developing country most affected by climate change, Pakistan would make a “robust” call for the urgency of climate solidarity and climate justice, based on the established principles of equity and common but differentiated responsibilities and respective capabilities. It said Pakistan would also lead the Group of 77 in climate change negotiations as the incumbent chair of the body, including in thematic areas such as “climate finance, adaptation, mitigation and capacity building.”