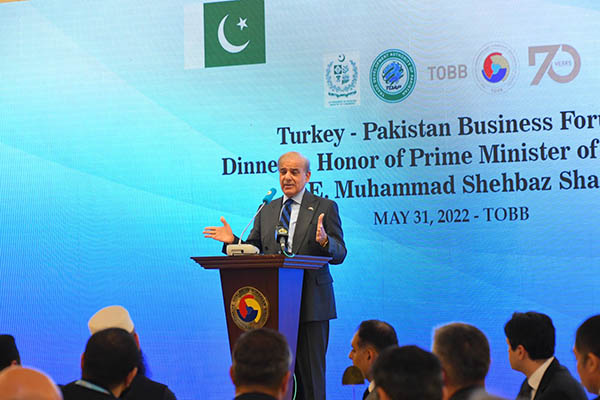 File photo of P.M. Sharif’s last trip to Turkiye in May 2022

Prime Minister Shehbaz Sharif left for Turkiye on a two-day official visit on Friday morning, according to the Foreign Office, which said he would attend several meetings aimed at expanding the two countries’ bilateral relations.

“Leaving for 2-day visit to Turkiye at the invitation of my brother H.E. President Tayyip Erdogan,” Sharif wrote in a posting on Twitter. “Inauguration of third MILGEM Corvette Ship represents deepening of defense cooperation between our two brotherly countries. High level exchanges are a defining feature of our partnership,” he added.

A few hours later, upon reaching Turkiye, the prime minister added: “Being in Turkey feels like being home, overwhelmed by the warmth of our Turkish brothers and sisters. Our bilateral ties have entered a new era of strategic partnership under the leadership of President Erdogan. We are on course to unpack the full untapped potential of relationship.”

In a statement, the Foreign Office said the prime minister and President Erdogan would jointly inaugurate the third of four MILGEM Corvette Ships for the Pakistan Navy, PNS Khaibar, at the Istanbul Shipyard. It said they would also hold wide-ranging discussions encompassing bilateral relations, the regional situation and other issues of common interest.

In addition to inaugurating the ship, the prime minister would also meet the president of the ECO Trade and Development Bank and interact with leaders of the Turkish business community. The Foreign Office added that the two countries “enjoy fraternal ties deeply embedded in commonalities of faith, culture, and history and underpinned by exceptional cordiality and mutual trust.”

The MILGEM project between Turkiye and Pakistan was signed in 2018 with ASFAT Inc., a Turkish state-owned defense contractor, according to which the Pakistan Navy would acquire four MILGEM-class ships from the Mediterranean state. According to the Foreign Office, the launch ceremony for the first Corvette for the Pakistan Navy, PNS Babur, occurred in Istanbul in August 2021, while the second ship, PNS Badr, was launched in Karachi in May 2022.

“The project represents a significant milestone in the Pakistan-Turkiye strategic partnership that continues to progress on an upward trajectory,” it said.