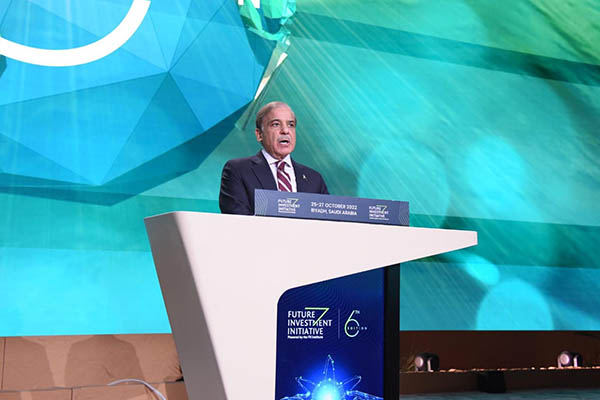 Prime Minister Shehbaz Sharif on Tuesday said he is ready to invest Pakistan’s resources in providing an enabling environment for the country’s youth to innovate and leap ahead of traditional businesses.

Addressing the Future Investment Initiative Summit in Riyadh, where he is on a two-day official visit on the invitation of Crown Prime Mohammed bin Salman, he urged businessmen to invest in Pakistan’s innovative business opportunities. Acknowledging Pakistan’s infrastructure development needs, he noted that the incumbent government was upgrading rails, ports, airways, water, gas, power, and digital infrastructure to meet modern needs.

“With a young and growing population, the market is expanding. Our government is enabling private enterprises to drive the economy,” he claimed. “The government is investing in public goods; these too are available for partnerships. I invite you all to participate in these and assist me in unlocking Pakistan’s potential while earning profitable returns on your investment,” he added.

During his speech, the prime minister suggested the summit’s participants consider establishing a satellite center in one of Pakistan’s leading universities to explore the rapidly growing Pakistani market and spur entrepreneurial innovation among its youth. “The satellite could become the center of a network of researchers, innovators, investors, and service providers to harness the capacities which, if optimized, would take Pakistan to a higher level of social and economic development,” he said.

The prime minister commenced his address by stressing that nothing was more important than ensuring the “collective” tomorrow was better than conditions today. “We are ready for it; we have the tools, skills and technology which enable us not just to navigate the complex world of tomorrow—but to also shape it today in a manner that has the most beneficial impact on humanity,” he said.

“We are living through truly transformational times. Throughout history, such times have triggered political, social environmental and economic changes. These changes have been powered by imagination, innovation and action; bold, decisive and consequential action,” he said, stressing that technology was a great “equalizer” that could cut through social, cultural and financial barriers and empower those equipped to leverage it.

“In Pakistan, I have seen with a sense of deep satisfaction how young women and men are crafting their careers—and boosting their earning power—by using technology in the diverse fields within the larger digital matrix like e-commerce,” he said. “I believe Pakistan has uniquely placed to leverage this change. We have one of the youngest populations in the world. Most of these youngsters are equipped with the tools of the new digital world … their talent is already recognized as Pakistan is the fourth most popular country for freelancing,” he added.