In address to CICA in Kazakhstan, prime minister calls on regional states to benefit from investment opportunities in Pakistan 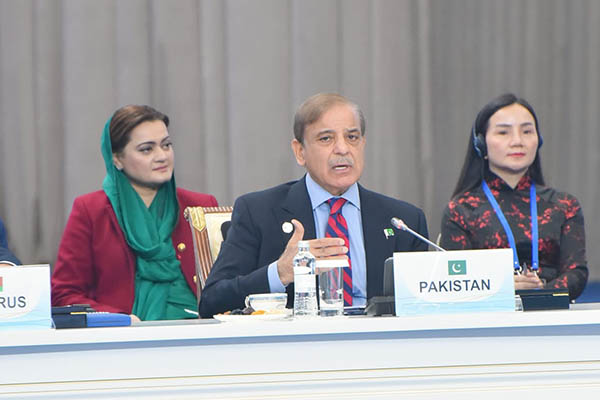 Prime Minister Shehbaz Sharif on Thursday used his address at the sixth summit of the Conference on Interaction and Confidence Building Measures in Asia (CICA) to highlight ongoing human rights abuses in India-held Kashmir, and urged regional countries to take notice of India’s policy of “preferring bullet over ballot.”

Attending the summit in Kazakhstan’s capital, Astana, he lamented that New Delhi had blatantly disregarded the U.N. Security Council’s resolution on holding a plebiscite in Kashmir. “Indian democracy is known less for its rights and freedoms and more for its repression and brutality,” he said. “The truth is the hard and harsh fact that India today is a threat to its minorities, to its neighbors, to its region and to itself,” he stressed.

“Yet, we are willing to engage with India for the sake of peace, prosperity and progress in the region because we cannot afford to have more poverty and unemployment on both sides of the border,” he said, adding available resources should not be wasted on fueling tensions. “I am absolutely ready and willing to have serious dialogue and discussion with our Indian counterparts provided they show sincerity of purpose and they show that they are ready to discuss issues which have really kept us at a distance over decades, created tensions, prevented trade and investment. This has to come to a stop,” he emphasized, noting that mutual trust could be built through constructive dialogue.

“I want to leave behind a legacy of peace and progress for the prosperity of the coming generations of our region,” he continued, as he also called for dialogue-based resolution of long-pending issues such as Palestine and peace and in Afghanistan. “A prosperous and stable Afghanistan is not only in the interest of Pakistan, but also the international community,” he said, recalling that four decades of conflict had taken their toll not only on Afghanistan, but also neighboring Pakistan. Nonetheless, he said, Pakistan had sacrificed immensely to control extremism on its soil and host four million Afghan refugees.

On Palestine, the prime minister reiterated calls for a peaceful resolution to ensure peace in the Middle East. He said regional countries should pool their resources to address the common challenges in the interest of peace and progress. “Pakistan’s first priority at the moment is to revive a rapid and equitable economy,” he said, while highlighting the China-Pakistan Economic Corridor (CPEC) as a key developer of the economic and connectivity landscape of the region.

In his speech, Sharif also invited CICA member states to consider benefiting from trade, investment and business opportunities offered by Pakistan and thanked the nations that had stepped forward to assist Islamabad in its flood relief and rehabilitation activities.

Indian Minister of State for External Affairs Meenakshi Lekhi, who represented India at CICA, responded to Sharif’s speech by accusing him of using the event to “propagate false and malicious propaganda” against her country. Claiming the prime minister’s remarks violated CICA’s principles, she said they were also akin to “gross interference in India’s internal affairs, sovereignty and territorial integrity.” She said Pakistan should “prove” its sincerity for dialogue by immediately ceasing “anti-India cross-border terrorism and [shutting] down its infrastructure of terrorism.”

Meanwhile, P.M. Sharif met several world leaders on the sidelines of the conference, and invited them to consider investing in various sectors of Pakistan.

In a statement after his meeting with Kazakh President Kassym-Jomart Tokayev, the Prime Minister’s Office said the two countries had agreed to diversify bilateral trade and explore the possibilities of expanding investment cooperation. The two leaders, it said, had reviewed bilateral relations, including trade, connectivity and energy, and agreed on enhancing technical-level engagement to accelerate progress on agreed items.

The prime minister, per the statement, emphasized the importance of direct air connectivity for boosting business linkages, people-to-people contacts, and tourism. He also informed Tokayev that Pakistan’s Special Economic Zones were open for Kazakh investors and invited Kazakhstan to benefit from ports at Gwadar and Karachi to expand their trade.