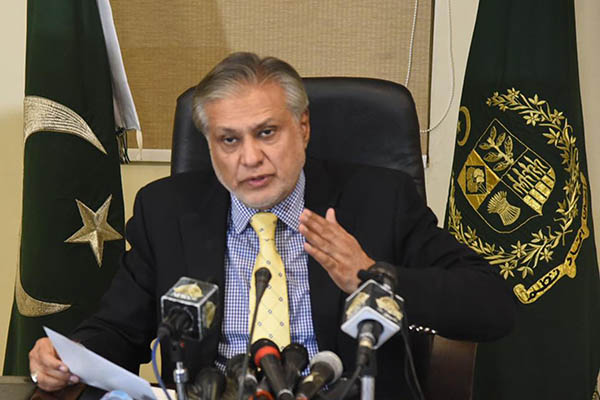 “We chose to save the state,” he told a press conference at the Pakistan Embassy in Washington, where he is currently on an official visit to meet representatives of the World Bank and the International Monetary Fund (IMF). “We knew it [economic reforms] would have consequences, but we opted for the state,” he stressed, alleging that allowing Imran Khan to remain prime minister would have proven worse for the country than this year’s devastating floods.

To a question on whether he believed U.S. President Joe Biden’s remarks on Pakistan’s nuclear program could have helped the PTI’s election campaign ahead of by-elections, Dar reiterated that Islamabad had a robust command and control system that had been globally acknowledged. “But when a politician who has been a P.M. [Imran Khan] says the nuclear program was good under me, but not now, this is how the world would react,” he claimed. “You should condemn him; he is doing petty politics,” he added.

“Pakistan’s economy is a man-made disaster,” he said, blaming the ousted PTI-led government. “Their incompetency, their mis-governance caused it. We are here to save the economy, not to do politics. May God accept our sacrifices,” he added.

At the outset of his presser, Dar said he had held 58 meetings with the chiefs of various international financial institutions, as well as officials of the U.S., Saudi Arabia and other countries, during his four-day stay in Washington. The World Bank and the U.K., he said, had hosted a roundtable on floods, where the UNDP, ADB and World Bank officials had presented a joint report on the devastation.

The report has estimated total losses of over $32.4 billion, with over $16 billion needed for immediate relief and rehabilitation. He said the government had already spent over Rs. 99 billion on relief and rehabilitation, adding that the date for a donors’ conference to be hosted by France would be finalized soon. He also emphasized that Pakistan would complete its current IMF program by June 2023 and would meet all its obligations, noting that Islamabad was committed to fiscal and energy reforms. However, he admitted, work on the energy sector was lagging and needed to be expedited.

On subsidies, the finance minister said the IMF had no issues with targeted subsidies. Claiming the government was not announcing any subsidies without prior discussion with the IMF, he clarified that the government did not need to approach the lender for approvals of price reduction. “That is our decision,” he stressed.

Referring to Pakistan’s grey-listing by the Financial Action Task Force (FATF), he said the PMLN had accomplished it in 2015 and would do so again. “We have banned factions, introduced laws, and solved issues. FATF’s Asia Pacific Group has done its reviews; we have a National Action Plan, and we hope to move to the whitelist again after the next review,” he said. The next FATF plenary to discuss Pakistan’s position is to take place this week—Oct. 20-21—with observers expecting it to finally whitelist Islamabad and remove it from states under increased monitoring.

Also on Sunday, Dar spoke at a meeting of Middle East, North Africa, Afghanistan, and Pakistan finance ministers and central bank governors with IMF Managing Director Kristalina Georgieva and called for greater policy support from multilateral donors amidst the climate-induced losses suffered by Islamabad. During the meeting, the IMF managing-director expressed deep sympathies with Pakistan and assured the Fund’s full support for its recovery.