PTI Claims No ‘Unconstitutional’ Demands Made in Meetings with Army Chief 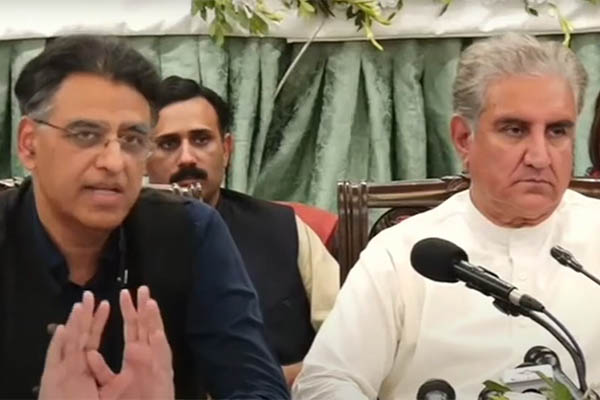 Screengrab of the press conference

The Pakistan Tehreek-e-Insaf (PTI) on Thursday acknowledged meetings between its leadership and Chief of Army Staff (COAS) Gen. Qamar Javed Bajwa, but denied that any “unconstitutional” demands had been made during these interactions.

Earlier, in an unprecedented joint press conference, military spokesman Maj. Gen. Babar Iftikhar and Inter-Services Intelligence (ISI) chief Lt. Gen. Nadeem Anjum had—without directly naming anyone—criticized how “certain people” would meet the Army chief in the dark of night while branding him a traitor in the morning. According to Lt. Gen. Anjum, in one meeting, the Army chief had been offered an “unlimited” extension to his tenure in office in exchange for helping the government defeat the vote no-confidence against it. He also maintained that the Army chief had been targeted for abuse and harassment because he refused to submit to unconstitutional demands.

Admitting that Khan had met the military leadership in closed-door meetings, PTI Secretary General Asad Umar claimed the PTI chief had demanded the military use its influence to ensure stability in the country. “Everything being discussed behind closed doors isn’t secret,” he said. “Imran Khan has discussed them in rallies and press conferences,” he said, adding that the demands were “not unconstitutional.”

Praising the armed forces for expressing a desire to stay within their constitutional limits—a marked contrast from the PTI chief’s claims of neutrality not being permissible under Islam—Umar said the political, economic and social crises facing the country required early elections. “It is also important to seek answers as to why this situation is arising in the country,” he said. “We need to think about it … when we look at the events that transpired, we will see that institutions have also made some mistakes,” he alleged.

Referring to an incident disclosed by the spymaster in which he had said he had been told the opposition, and not the economy, was Pakistan’s biggest problem, Umar claimed this was accurate. “It has been proven via literature that the law should be upheld otherwise a country cannot progress,” he claimed. He also noted that the DG ISI had said Pakistan had been divided into two parts due to hatred. “It happened because the wishes of the people were not respected,” he said of the creation of Bangladesh, in which his father, Maj. Gen. (retd.) Ghulam Umar, had played a key role.

“You can argue with Imran Khan’s criticism, but whatever he says is for the Army and the country’s betterment. It is his constitutional right to criticize the Army,” said Umar, lamenting that most of the military officials’ press conference had focused on the PTI—though the party was never directly named. “[Khan] believes a strong Army is crucial for Pakistan, given its strategical position,” he said, claiming the ousted prime minister had “never” maligned the armed forces abroad.

“[Military officials] said that leveling allegations against the institution’s leadership was inappropriate … but I would like to ask that if the leadership of the armed forces has its importance, then doesn’t the reputation of country’s biggest leader matter?” he questioned, reiterating the PTI’s unstated policy of “popularity” granting a degree of latitude in otherwise-no-go areas for the general public.

Addressing the same press conference, PTI Vice Chairman Shah Mahmood Qureshi sought to dispel the impression—created by a press conference from PTI leader Faisal Vawda—would be anything but peaceful. Accusing Vawda of trying to discourage the public from participating in the long march through fear, he claimed it had failed because state television had broadcast it, suggesting it was “pre-planned.”

Alleging that the then-Punjab government had “attacked” the PTI’s last long march on May 25, he claimed the party was unable to defend itself. “The coalition government is propagating the narrative that the PTI wants political instability, however, we have no such intentions,” he claimed, despite several past statements from PTI leaders repeatedly claiming the long march could steer Pakistan toward unparalleled crises. The former foreign minister alleged that the country’s political instability had been ongoing since the no-confidence motion against Khan. The only solution, he reiterated, was early elections.

“I urge people to participate in PTI’s long march with enthusiasm, without any fears, as it is a step towards Khan’s Haqiqi Azadi agenda,” he added.

Later, addressing the DG ISPR and DG ISI’s remarks about the foreign cypher, Qureshi claimed the PTI had realized the significance of it and summoned a meeting of the National Security Committee. “We did not build any narrative that could harm Pakistan,” he claimed.

Along with Umar and Qureshi, the press conference was also attended by Shireen Mazari, Hammad Azhar and Maleeka Bokhari.