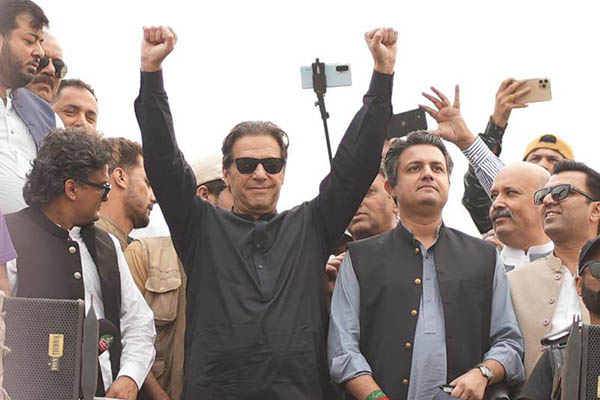 The Pakistan Tehreek-e-Insaf (PTI) on Tuesday amended its previously released schedule for its ongoing long march on Islamabad, saying it now expects to reach the federal capital on Nov. 11, and not Nov. 4.

In a posting on Twitter. PTI Secretary General said the new schedule for the ‘Haqiqi Azadi’ march expected Khan and his caravan to reach Rawalpindi on Nov. 10. “Convoys from across Pakistan will then converge on Islamabad on Nov. 11,” he added. Earlier, PTI Senior Vice-President Chaudhry Fawad Hussain had likewise said that the PTI now expected to reach Gujrat on Nov. 4—its original date for reaching Islamabad—and would spend a day in Jehlum on Nov. 6.

The amended date has raised questions over the sincerity of the PTI’s march, as observers have noted that even at a snail’s pace, it would not be too difficult to reach Islamabad from Lahore within 3-4 days. It has triggered rumors that the party is hoping to secure a “deal” ahead of its arrival in Islamabad and is purposely delaying the march to grant maximum time for this. Adding fuel to the fire is the PTI’s own policy of only marching for 7-8 hours per day, and its chief returning to his home in Lahore every night and then driving back to climb on his container in the morning.

Thus far, the long march has covered roughly 100km—in five days. The PTI maintains this is because of the “large” crowds that are gathering to greet Khan, as members of the ruling coalition claim the crowds are barely enough to justify a successful rally, much less a long march.

During his addresses in Gujranwala on Tuesday, the fifth day of the long march, PTI Chairman Khan uttered noticeably less broadsides against the military leadership than on previous days, but boosted his calls for Chief Justice of Pakistan (CJP) Umar Ata Bandial to take notice of the alleged torture of PTI activists, including Senator Azam Swati and his aide Shahbaz Gill, in police custody.

“What they did to Arshad Sharif … he told me who was threatening him,” he said. “Chief Justice sahib you should take interest in this yourself. Arshad Sharif is first sent outside and then he is killed. I am asking you today: If you [CJP] and the judiciary don’t stand for us, then who will,” he said, perhaps forgetting that he has already confirmed that he was the one who encouraged the slain journalist to leave Pakistan.

During one speech, Khan also compared his party’s ‘Haqiqi Azadi’ movement with the struggle of Awami League chief Sheikh Mujibur Rehman, claiming East Pakistan had been lost because a political party with a legitimate political mandate was denied its right to rule. “A shrewd politician [Zulfikar Ali Bhutto], in his greed for power, set the armed forces against the then largest party [Awami League], which had won elections, causing the dismemberment of the country,” he said, claiming now his party was being denied the same right as the “largest and sole federal party” in the country.

Alleging that Bhutto had encouraged divisions between the Army and the Awami League, the PTI chief alleged that PMLN’s Nawaz Sharif and PPP’s Asif Ali Zardari were now attempting to “conspire with the establishment” to prevent the PTI from returning to power.

Challenging Sharif, he said he would contest the same constituency as the PMLN leader in the next general elections, and beat him on his home ground. He also lashed out at Zardari, saying he would go to Sindh after concluding his long march and ensure “real freedom” for the people of the province from PPP’s rule.