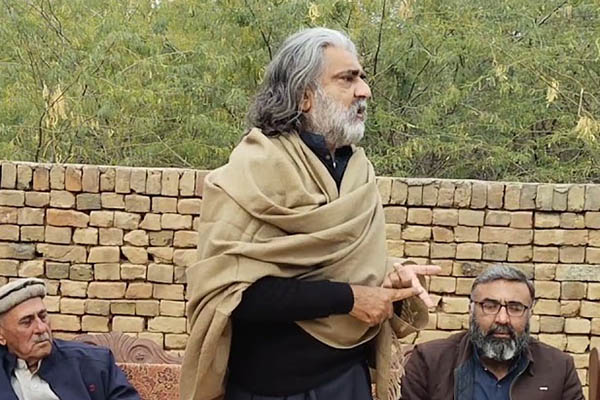 Pakistan Tehreek-e-Insaf (PTI) leader Maj. (retd.) Khurram Hameed Khan Rokhri on Thursday told a private broadcaster that he did not agree with party chief Imran Khan’s allegations of a senior military officer orchestrating the attack in Wazirabad, while confirming a series of “backchannel” talks between his party and the security establishment.

Since being shot while addressing a public rally from his container on Nov. 3, Khan has repeatedly accused Prime Minister Shehbaz Sharif, Interior Minister Rana Sanaullah and Maj. Gen. Faisal Naseer of “orchestrating” the attack. While he has yet to provide any evidence of his claims, he maintains he has been provided this information by personnel within “agencies” and has demanded police register a First Information Report (FIR) against them.

Speaking with journalist Hamid Mir on Geo News, Rokhri said that Maj. Gen. Faisal Naseer of the Inter-Services Intelligence (ISI) was an old acquaintance who was “principled and professional” and would never compromise on his principles at anyone’s behest. Reacting to a recent video issued by Salman Ahmed on behalf of the PTI, he said he felt the need to clarify the situation because he did not agree with the spreading of falsehoods about the Army.

Rokhri had given a similar interview a few days back, defending Maj. Gen. Faisal Naseer in contrast to Khan’s allegations, as a result of which he was issued a show-cause notice by the PTI.

During his interaction with Mir, the PTI leader said that the military officer’s name had arisen after Khan’s aide Shahbaz Gill had been arrested for allegedly inciting mutiny in the armed forces. Referring to a meeting in Khan’s Bani Gala residence, he claimed that discussions had revolved around a new officer being posted in Islamabad to “eliminate the PTI and Imran Khan’s narrative.”

Recalling that he had questioned this claim, he said Salman Ahmed had questioned him on Naseer and then conveyed his views to Khan. After this, he said, Khan had told Ahmed to “ask me to confront Gen. Naseer.”

Narrating that he had then called Gen. Naseer and requested a meeting, he said he had directly asked the military officer if he had been posted with an intent to target the PTI. The officer, he said, had told him that he had only been posted the day Lt. Gen. Sarfaraz was martyred in a helicopter crash on Aug. 2. “I am a professional man,” he quoted Gen. Naseer as saying. “Why would I want to do this … Imran Khan is the leader of the biggest political party of Pakistan … he is a hero of the country … If someone is telling Imran this, please go and tell him that there is nothing to it,” he added.

At this, claimed Rokhri, he had asked the ISI official to meet the PTI leadership, to which he had agreed. This, said the PTI leader, was conveyed to his party’s senior leadership, which had instructed him to hold another meeting with Gen. Naseer. In this second meeting, he said, Naseer had once again assured him there was no operation in play to target the PTI. “[He] requested [the PTI] not defame the military leadership on the stage [at rallies],” he added.

After this, said Rokhri, a third meeting was organized in which he was joined by Salman Ahmed as a representative of Imran Khan. “We wanted to go towards elections so that Imran wins by a two-thirds majority. Imran Khan’s real power is the vote,” he said, claiming Faisal Vawda, whose party membership was revoked, had been trying to suggest the same thing.

The third meeting, per Rokhri, had ended with a decision to have Khan meet the Army officer in a personal capacity. “They [officers] said that they didn’t want Imran to come or that such things go in public … they said they trusted me and asked me to keep the points [for negotiations] before them,” he said, adding that he was then called to meet Khan in Bani Gala over this twice but was turned away each time without any interaction. “When they called me the third time, I refused,” he said.

During his interview, Rokhri maintained that he still supported Khan, adding that the PTI chief was being “misled” by some people within his party. He also regretted that he had been made a target of abuse by PTI supporters on social media since going public with his views on Maj. Gen. Faisal Naseer.