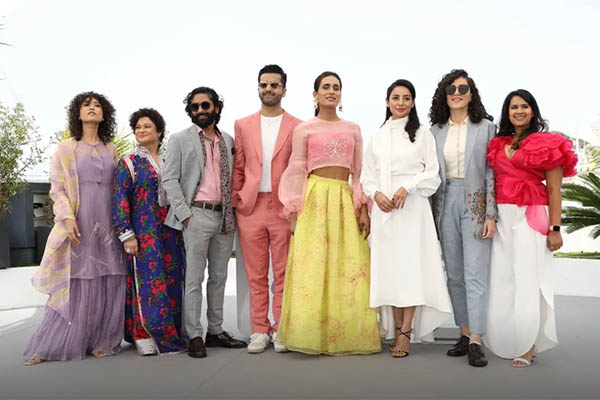 The cast and crew of ‘Joyland’ at Cannes

Award-winning film Joyland, which was set to be released across Pakistan from tomorrow after being cleared by the Central Board of Film Censors (CBFC), will not be exhibited in Punjab after the provincial government “recalled” it due to “persistent complaints.”

In a notification dated Nov. 17—just a day before the film is set to be released—the Punjab Information and Culture Department said it was exercising powers granted to it under Section 9 (1 & 2) of the Motion Pictures Ordinance, 1979 to “recall” Joyland “in the wake of persistent complaints received from different quarters.”

Addressed to distributor and co-producer Sarmad Khoosat, the notification went on to say that the movie was not permitted for exhibition in Punjab “till the further orders of the government.”

The announcement comes as a blow to the producers of Joyland, who had just a day earlier been informed that the film had been cleared for nationwide release after some “minor cuts.” Salman Sufi, head of the Prime Minister’s Strategic Reforms Unit, announced in a posting on Twitter on Wednesday that Joyland had been “cleared for release by the censor board review committee formed at the direction of Prime Minister Shehbaz Sharif.”

Exactly a week before its release, the Information Ministry on Nov. 11 withdrew the certification for Joyland’s release over “highly objectionable material” that does not “conform with the social values and moral standards of our society.” The decision, coming after Pakistan had already picked the film as its entry to the to the 95th Academy Awards for the International Feature Film Award, drew mass outrage and social media campaigns globally, with critics questioning how a film that had already been cleared for release could be abruptly withdrawn.

Amidst the mounting criticism, the prime minister formed an eight-member committee comprising several federal ministers that reviewed the film and recommended a full board of the CBFC take a final decision on whether the film should be released or not. In its meeting on Wednesday night, the full board sought some minor cuts and allowed it to be released per schedule.

Joyland attracted controversy for featuring a relationship between a married man and transgender woman, with critics accusing it of promoting “immorality” in Pakistan. By contrast, defenders of free speech and expression have argued that if someone feels the movie is inappropriate, they should just not watch it, rather than imposing a blanket ban that impacts the entire country.