Sharif Siblings Pledge to Not Bow to Pressure

Nawaz Sharif issued diplomatic passport, suggesting he is preparing to return to Pakistan 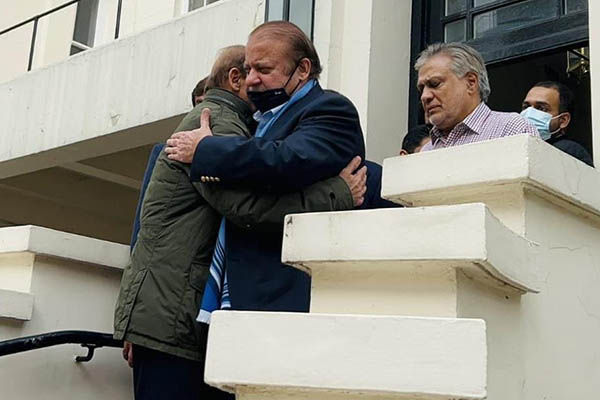 A huddle between Prime Minister Shehbaz Sharif and his elder brother, Pakistan Muslim League (Nawaz) leader Nawaz Sharif, in London has reportedly decided to not bow to any pressure on the appointment of the next Army chief or early elections.

The high-profile meetings—at least three have occurred in the two days the premier has spent in London following his participation in a climate change summit in Egypt—were confirmed by Defense Minister Khawaja Asif in an interview with Geo News. Accompanying the prime minister, he said a key part of the discussions revolved around the appointment of the next Army chief, as well as the Pakistan Tehreek-e-Insaf (PTI)’s ongoing protests and demands for early polls.

While Asif did not specify the contents of the meeting, sources within the PMLN have claimed that both Sharif siblings agreed that only the prime minister has the authority to appoint the Army chief and this would not be compromised in any capacity. Earlier, rumors had suggested that “certain quarters” had encouraged the prime minister to offer an extension to incumbent Army chief Gen. Qamar Javed Bajwa or even consult with PTI chief Imran Khan over the appointment to avoid controversy over the powerful post. A joint press conference of the DG ISI and DG ISPR had confirmed that Khan had offered Bajwa an “indefinite” extension prior to his ouster as prime minister in an apparent bid to avoid the vote of no-confidence that resulted in Sharif assuming the top office.

According to the sources, the premier conveyed to his elder brother that the ruling coalition had no desire to proceed to early elections. He also maintained that the incumbent government was willing to stand by its stance regardless of any potential consequences.

After their third meeting on Thursday, both Sharifs spoke briefly to media, with the prime minister blaming Khan for trying to secure his aims through violent agitation. “Defeat is the destiny of those who are doing the long march,” he said, while refusing to elaborate any further on the next Army chief.

In his talk, Nawaz urged the public to pray for Pakistan, stressing the country was going through a difficult phase. Emphasizing that mob rule would never be tolerated, he said that no government had submitted to dictation to mobs, and none would in future either.

Also on Thursday, it was reported that Nawaz Sharif has been issued a diplomatic passport in accordance with his status as a former prime minister of Pakistan. The passport, per reports, has a five-year validity and is being seen as an indication the PMLN leader is aiming to return to Pakistan shortly.

Sharif’s previous passport had expired during the tenure of the PTI government, which had refused to renew his passport, maintaining as an absconder he was no longer entitled to the privilege.