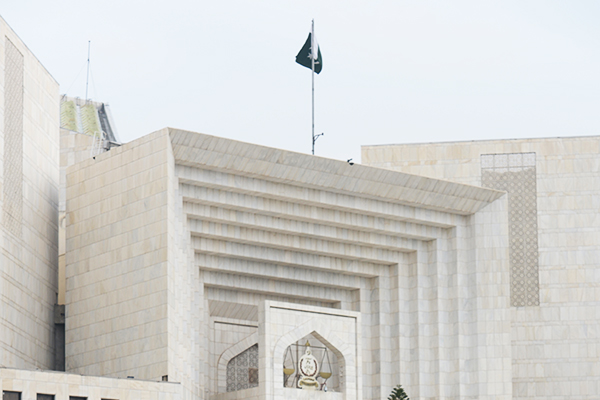 The Supreme Court of Pakistan on Thursday dismissed a plea seeking a halt to the Pakistan Tehreek-e-Insaf (PTI)’s ongoing long march to Islamabad, terming it “infructuous” unless a law and order situation develops.

“Prima facie, the court’s interference on the issue would be premature,” said Chief Justice Umar Ata Bandial as he heard the case with Justices Athar Minallah and Ayesha Malik. Noting that the court would exercise “judicial restraint” in political matters, he said the court would only intervene if there were a clear risk of a constitutional violation.

The dismissed petition was filed by Jamiat Ulema-e-Islam (Fazl) Senator Kamran Murtaza last week, claiming the PTI’s long march risked triggering unrest. The court informed him that he was free to file a fresh plea if the law and order situation actually worsened, rather than was feared to do so.

During the hearing, the petitioner noted the PTI’s long march had commenced last month and was expected to reach Islamabad within a few days. “Everyday life of people has been disrupted due to the long march,” he claimed, adding that while the party had the right to stage a protest, it could not be permitted to disturb the general public.

To this, the judges questioned if the civil administration had become so weak that it could not handle the long march and urged the senator to approach the government for preventative steps. Murtaza, however, stressed that the situation was beyond the ambit of civil administration as a shooting incident at Wazirabad had already claimed one man’s life and left Khan injured.

The CJP also noted that the long march was a “political issue” and should be resolved politically. Maintaining that any judicial interference in political matters created a “difficult situation” for the court, he acknowledged that reports of the PTI planning to bring weapons to Islamabad were concerning and could impact the law and order situation.

Questioning whether the PTI had brought weapons to the federal capital during its march in May, he said there were certain limits that all political parties must adhere to during protests. He also questioned whether the petitioner had sought the help of the Punjab government to curtail the march, wondering further if it would be appropriate for the court to intervene if communication between the center and provinces had been cut off.

Maintaining that, prima facie, the court’s interference in the issue would be “premature,” the CJP recalled that the Supreme Court had intervened in May when the administration had refused to provide the PTI with H9 ground for its protest. However, he noted, the crowd had moved to D-Chowk in violation of its agreement and questioned whether there were fears of a similar situation this time.

According to the additional attorney general, the administration has asked the PTI to stage its rally at Rawat. However, he said, the PTI has yet to file a response in an affidavit, adding that a similar case was already pending before the IHC. “The court will interfere if there is a clear risk of a constitutional violation,” the CJP said, as he dismissed the petition.