U.K.-based businessman claims he cannot travel to Pakistan to testify due to cases lodged against him 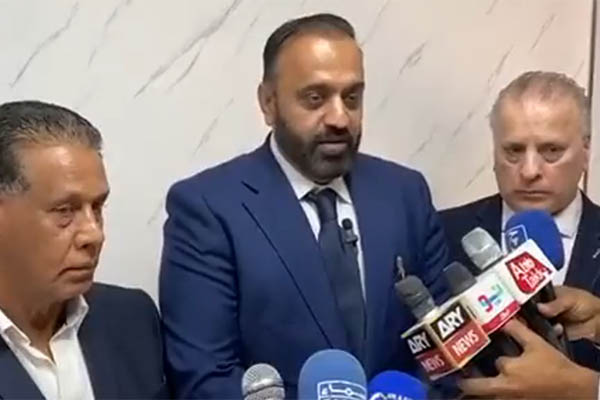 Tasneem Haider, the man who has alleged that the plot to assassinate journalist Arshad Sharif and Pakistan Tehreek-e-Insaf (PTI) chief Imran Khan was hatched by the Pakistan Muslim League (Nawaz) in London, has refused to provide any evidence of his claims, maintaining he is the “evidence.”

Over the weekend, the U.K.-based businessman alleged in a press conference alongside representatives of the PTI that he had been urged to provide a “shooter” for the assassination bid by PMLN leader Nawaz Sharif. The PMLN has subsequently rejected this, accusing him of making baseless allegations, and demanded he provide evidence to substantiate his claims. They have also vowed to contest the allegations in court.

On Monday, Haider alleged to Geo News that journalist Sharif’s personal devices—missing since his murder last month—had been delivered to London. He also claimed that he had informed Khan of the plot on his life as soon as he learnt of it. “Imran Khan replied that these people cannot do anything to him. He said that he had left it to Allah,” he said, quoting a PTI leader who had accompanied him at the press conference.

To questions on the evidence he had claimed to possess, he said: “I have not given any evidence to the police. The police say you are the evidence … I assure you I will get Nawaz Sharif, Maryam and Butt arrested within 2-3 days. Police say they don’t need evidence from me. They are saying I am being taken seriously.” Yet, he admitted, he had zero evidence to prove his claims. “I have no evidence. No audio evidence. No WhatsApp chats. Nothing else. There is no record of my meetings with Butt.”

According to Geo News, Haider has repeatedly accused PMLN U.K.’s Butt of being complicit in the plot. He alleged that Butt had told him he had “dealt” with Arshad Sharif and that he (Haider) would have to deal with Khan. To a question on what he would do if police in London did not take any action, he claimed he would take the matter to the Supreme Court of Pakistan.

The private broadcaster noted that Haider’s statements changed every time he was questioned on clear inaccuracies. At one point, it said, Haider had said he had met Nawaz Sharif one-on-one early on July 8; however, he recanted and claimed it was “later” after it was pointed out that this coincided with Eidul Fitr and Sharif had not met anyone alone on that day. He then claimed he had met Sharif and Butt twice more—on Sept. 20 and Oct. 12—to plan the shooting.

This is a questionable timeline, as the PTI had yet to announce the date for its long march. How a plan could be hatched to target Khan in Gujrat during the long march, as per Haider, remains in question when the party didn’t even announce an intent to commence it until the last week of October.

Haider also told Geo News that he had been contacted by the Joint Investigation Team (JIT) probing Arshad Sharif’s murder. Separately, the investigators probing the assassination attempt on Khan have also contacted him to provide evidence about his allegations.

According to daily Dawn, Lahore Capital City Police Officer (CCPO) Ghulam Mahmood Dogar, who also heads the JIT, contacted Haider and asked him to visit Pakistan to record a statement before the team under Section 161 of the Code of Criminal Procedure. However, it reported, Shah had refused to return to Pakistan, citing his status as a proclaimed offender in criminal cases lodged in Gujrat district. According to the report, negotiations are currently underway to secure testimony via video-link.