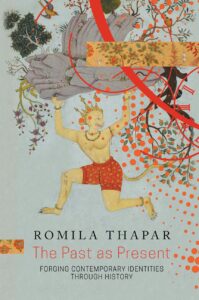 Indian historian Romila Thapar has provided a lucid definition of Hinduism—as it has progressed over the centuries—in The Past as Present: Forging Contemporary Identities through History (2014), a collection of essays. Traditionally, discussions on Hinduism tend to be confined to Hindu philosophy and theory, while ignoring the manifestation of a contemporary insurgent, active movement, largely galvanized for political ends. This “new” Hinduism, being propagated by the Sanghs, Parishads and Samajs, is often branded ‘Hindutva,’ as described by V.D. Savarkar in an attempt to restructure the indigenous religions into a monolithic, uniform religion, paralleling some of the features of Semitic religions.

This seems to be a fundamental departure from the essentials of what might be called indigenous Hindu religions, in many ways alien to the earlier culture of India, and equally disturbing in the uniformity it seeks to impose on the still existing variety of Hindu religious articulation.

In a strict sense, a reference to Hinduism would require a more precise definition of the particular variety being referred to—Vedic Brahmanism, Puranic Hinduism, Bhakti, Tantrism, Brahmo Samaj, Arya Samaj, Shaiva Siddhanta, etc. These are not comparable to the sects of Christianity or Islam, as they seldom relate back to a single sacred text or its narrative and interpretation, but allow alternative texts and rituals. Nor do they focus on a single monotheistic deity common to all. Many are rooted in ritual practices and beliefs rather than a common text. It has been argued that a characteristic difference is that Hindu sects relate more to orthopraxy than to orthodoxy. Hinduism, therefore, is not just a religion with a trajectory moving from a beginning to an evolution from Harappan through Vedic, Puranic and Bhakti forms. In this it differs from Buddhism, Jainism, Islam and Christianity.

What has survived over the centuries is not a single, monolithic religion but a diversity of religious sects that we today have put together under a uniform name. The collation of these religious groups is defined as Hinduism even though the religious reference points of groups might be quite distinct. There was a time when Hinduism was a convenient, generalized label among scholars for studying the current indigenous religious expressions. This was when it was claimed anything from atheism to animism could legitimately be regarded as part of Hinduism. Today, the Hindutvavadis look upon atheists and animists with suspicion and contempt and regard them as unacceptable. The label Hinduism is thus being used in a different sense now.

The origin of Hinduism has no distinct point in time. The Vedas were regarded as the foundation until the discovery of the Indus Valley Civilization in the 1920s when its origin was then pushed back, but so far with some ambiguity, since the decipherment of the pictograms is still awaited. There is no historically attested founder, no text encapsulating the teachings of the founder, and initially no organizational base, all of which reduces its historicity. This of course makes it easier to reinterpret, if not to create such a religion afresh, as and when required.

The Vedic religion requires belief in specific deities in the Vedas having divine sanction, in the immortality of the soul, as also the immortality of the performance of the yajna, the sacrificial ritual. The Brahmana is the intermediary between men and gods, and worship focuses on rituals without images and performed in locations that change with each performance. There are therefore no icons and no temples. Because of the pivotal role of the Brahmana it is sometimes referred to as Brahmanical Hinduism or Vedic Brahmanism to distinguish it from other forms that followed, such as Puranic Hinduism.

The Vedic texts in the Dharmashastras are said to constitute the norms for Brahmanism and the religious practices for the upper castes. A characteristic belief concerns the afterlife. The soul was said to transmigrate to another body after death and one’s destiny in the next life was determined by the quality of one’s actions in this life—the theory of karma. This was the theory that was said to make people conform to the norms out of fear of what was to come in the next birth. But not everyone accepted this. There are repeated references to an eternity in either heaven or hell, as among the heroes celebrated on hero-stones or among the characters of the Mahabharata.

Brahmanism maintained its identity and survived the centuries with few fundamental changes, even after the decline of Buddhism. Maintaining the continuity was difficult in view of changes within its followers, but it was possible due to generous endowments of land and items of wealth through extensive royal patronage, which in turn reinforced its claim to social superiority and enabled it further to emphasize its distance from other castes and their practices. The extensive use of Sanskrit as the language of rituals and learning gave Brahmanism access to high political office and proximity to the royal courts. This again supported its exclusive status. The use of Sanskrit gave it a pan-Indian character, the wide geographical spread of which provided both mobility as well as a strengthening of its social identity. Through the language of the elite and of the upper bureaucracy, the new kingdoms that mushroomed throughout the subcontinent in the first millennium A.D. provided ample employment opportunities for Brahmanas both as ritual specialists and in the administration.

The religious intolerance of royalty flavored with politics often taking violent forms is not unknown in many societies. Possibly what muted religious intolerance among a larger number of people in India is the link between religion and caste, which confined it to being a local event. Communication of news was in any case relatively limited. For example, knowledge about the raids of Mahmud of Ghazni was confined to the areas he visited.

The European adoption of the term Hindu gave it further currency, as also the attempts of Catholic and Protestant Christian missionaries to convert the Hindu/Gentoo to Christianity. The pressure to convert initially disassociated with European commercial activity, changed with the coming of British colonial power when, by the early 19th century, missionary activities were either surreptitious or overt. The impact both of missionary activity and Christian colonial power resulted in considerable soul searching on the part of those Indians who were close to this new historical experience.

Can one convert to Hinduism?

It is often stated that one is born a Hindu, i.e. into a particular caste whose regulations are to be observed, and one cannot therefore be converted to Hinduism. Caste identity cannot be changed although one can join a sect of one’s choice, provided it has no caste restrictions. The idea of conversion was debated in the 19th century when this was seen as a way of expanding the numbers of Hindus. This became serious when numbers were counted of the majority and minority communities. Previously it had been maintained that each sect had its own regulations, obligations and duties that often drew both on religious antecedents and social requirements. Gradually, if a sect acquired a large following cutting across castes, it tended to become a caste in itself. An example of this is the history of the Lingayat sect that today is also a politically powerful caste.

The confrontation of Islam and Hinduism is often posed as two monolithic religions, face-to-face. In fact, the experience was probably bewildering to begin with for both, since the cognizable institutions were rather different. There was no single ecclesiastical authority among the Hindus to which Islam could address itself. It faced a large variety of belief systems of which the most noticeable common feature to Islam was idol-worship—but even this was by no means uniform. Hence the frequency with which references are made preferentially to castes and ethnic communities—Rajputs, Jatts, Zamindars, etc.—in the context of indigenous religions rather than Hindus, a term that gradually came into use.

Heresies or varieties of faith?

All religions give rise to heresies with which they contend and thereby clarify and hone their own ideas and intentions. In India there has been the heterodoxy of Nastika thinking, that is, those who deny deity, and are opposed to the conservative views of the Astikas who believe in gods and the sanctity of the Vedas. This has been an essential part of religious and philosophical thought for two and half millennia. The Shramanic tradition played a role in this for many centuries. It led to contestations, but the heresies remained, crucial to new thinking. Now Hindutva disallows its views being contested or the presentation of alternative views, and does so quite brutally in terms of verbal abuse and of physical assaults on those that disagree with it.

Religious violence is not alien to Hinduism despite the modern myth that the Hindus are by instinct and religion a non-violent people. One suspects that the genesis of this myth was in the romantic image of the past in some Orientalist scholarship, and in the requirements of nationalism stressing the spiritual superiority of Indian culture of which non-violence was treated as a component. Non-violence as a central tenet of behavior and morality was perhaps most widely discussed in the Shramanic tradition, that of Buddhism and Jainism. Not that this tradition was able to prevent violence but at least it was brought to the fore. These were the religions that not only were allowed to decline but were persecuted in some places. One is often struck by how different the message of Gita would have been and how very much closer to non-violence if Gautama Buddha had been the charioteer of Arjuna instead of Krishna. Gandhi’s concern with ahimsa is more correctly traced to the Jaina imprint on the culture of Kathiawar. Sporadic killing apart, even the violence involved in the regular burning of Hindu brides or dowry in the city of Delhi, as of late, does not elicit any powerful consistent condemnation against the perpetrators of such violence from the spokesmen of Hinduism.