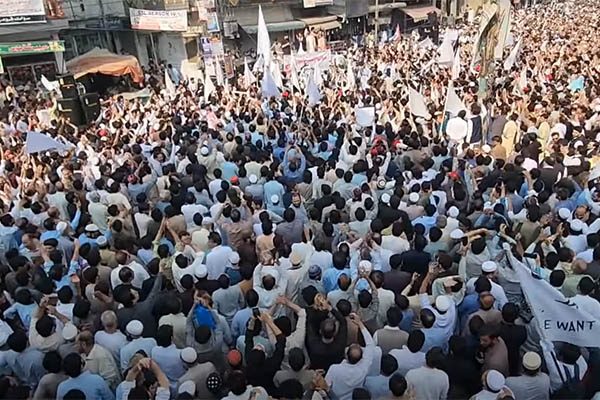 Screengrab of thousands protesting against terrorism in Mingora, Swat

The people of Swat are once again protesting at the way they are being subjugated and terrorized by terrorists from across-the-border, whose latest act is to kill a driver, Hussain Ahmed, and injure two schoolchildren in an attack. That is the sort of thing that happened all too often in 2008, when militants under “a man of God” terrorized the people of Swat. It was as humiliating for the state of Pakistan then as it is now. The people of Swat, no longer persuaded by the “Islamic reforms”—which means no education for girls—by the invading terrorists are protesting because they find themselves forced once again to stage an exodus from the valley. The man who was to “introduce” Islam then—Mullah Fazlullah—is no more, having been killed by a U.S. drone in Afghanistan. The “revolution” is once again coming from Afghanistan and the Tehreek-e-Insaf government in Khyber-Pakhtunkhwa (KP) is unable to help as it tries to “mollify” its killers, the Pakistani Taliban from Afghanistan.

The KP government is not supposed to be anti-Taliban as they are supposed to follow its leader Imran Khan in his anti-Americanism and sympathies for the Taliban who are fighting America and Pakistan’s “imported” government. The people of Swat, however, are faced with an existential problem: they are not able to live normal lives, particularly with regard to the girls in their families who need to go to school, whose school-bus the terrorist have now targeted once again after the 2012 incident in which they nearly killed Malala Yousafzai, after which she got the Nobel Peace Prize in 2014 as a kind of commentary on how Pakistan deals with the Taliban. It is unfortunate that after so many years Pakistan is still vulnerable after putting in place a government in the province that challenges the country’s policy vis-à-vis the Taliban because it hates the U.S. more.

Let us look at what happened when Fazlullah swept into Swat. The nation was traumatized by a video that showed the Taliban whipping a 17-year old girl “for fornication.” The Taliban spokesman said the video was not the latest thing happening after the signing of Nizam-e-Adl agreement between the Taliban leader Sufi Muhammad and the-then NWFP government. He thought it was a plot to vilify the Taliban and scuttle the Nizam-e-Adl agreement. He went on to claim that Islam did not allow democracy and referred to the Quran as authority on this. The Taliban denounced the roshan-khayal Pakistanis for being sold to the U.S. The anti-U.S. rhetoric of Taliban of that day has been adopted by the non-Taliban elements of Pakistan today. Is Swat ripe for the plucking then? Francis Fukuyama, in State Building: Governance and World Order in the Twenty-first Century, wrote: “Weak governance undermines the principle of sovereignty on which the post-Westphalian international order has been built. It does so because the problems that weak states generate for themselves and for others vastly increase the likelihood that someone else in the international system will seek to intervene in their affairs against their wishes to forcibly fix the problem.”