Editorial: The Hijab Crisis in Iran 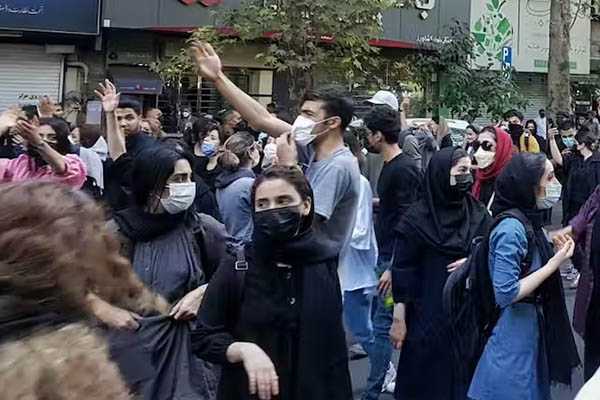 Screengrab of a protest against the hijab in Tehran

Iranian woman Mahsa Amini was arrested by the morality police of Iran on Sept. 16 for not practicing hijab. Three days later, after she died in hospital, the country erupted in unexpected rage. Protests against her extended to all cities outside Tehran, even to the Kurdish areas because Amini was Kurdish by ethnicity. Almost all of Iran protested her death across the country’s socioeconomic and educational spectrum. The demonstrations triggered global support for Iranians even as the world continues to ignore the plight of women in neighboring “Islamic” state Afghanistan where hijab is not the only weapon of oppression. Apart from “covering in public,” girls living under the Afghan Taliban-led government have been banned from school after the sixth grade and employment for adults is also hard to come by, with few options available apart from teaching or nursing.

It is sad that these two Muslim states, and that too in Pakistan’s neighborhood, should do this to their women. One must admit with some trepidation that parts of Pakistan too are “unofficially” observing this kind of “protection” of the “honor” of women with consequent educational disabilities that women have to endure. The danger is that—despite no chance of “Islamic” parties coming to power—it will catch on. In 1979, after Ayatollah Khomeini’s compulsory hijab at the workplace, Iranian women took to the streets to protest and were violently attacked by pro-Revolution forces that grew into the morality police that arrested and killed Mahsa Amini. In Islamic Afghanistan, women’s employment has virtually disappeared, while is the country’s rural areas, where nearly 80 percent of the population resides, women have seen no progress at all.

In the Islamic world at large, and certain parts of Pakistan in particularly, there is an unofficial aversion to ensuring equal rights for women. In 1994, in Turkey—where Kemal Attaturk had actually worked against this conservatism—Ankara and Istanbul saw the use of force on the streets to enforce the Islamic veil on Turkish women. It was the same thing all over again as Uzbek Juma Namangani beat up women in the Ferghana Valley for not wearing the shuttle-cock burqa, or Mullah Umar beating up women in Kabul for walking alone in burqa. Much of this happened in the past but the general trend of “turning back” in many Muslim countries these days has brought with it a bias against women as if they were not a part of the population. Yet the sad part of this trend is that maltreatment of women in the name of Islam does a lot of damage not only to civilization but also to the ability of Muslim nations to rise. Nations are born because there are women to give them birth; and nations rise because their children are nursed and trained as civilized human beings by their mothers. Sadly, today the Islamic world can be judged in terms of its general level of civilization by the way it treats its women.