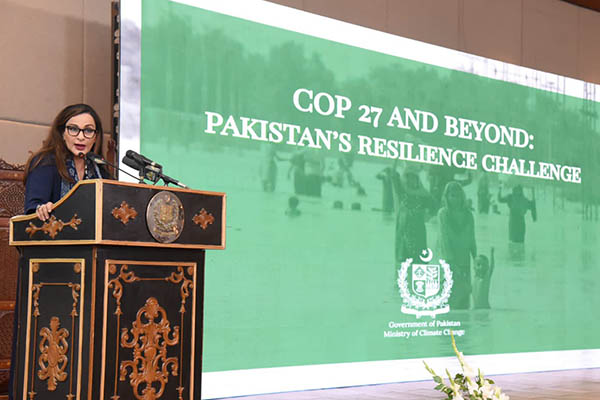 British daily Financial Times on Thursday honored Climate Change Minister Sherry Rehman in its “25 Most Influential Women of 2022” list, with Scotland’s first minister praising her role at the COP27 summit in an accompanying write-up.

The unranked list has highlighted 25 women from across the world in the categories of leaders, heroes and creators. Apart from Senator Rehman, it includes luminaries such as tennis player Serena Williams; Finnish Prime Minister Sanna Marin; and Meghan, Duchess of Sussex, for her podcast in which she interviews other famous women.

In her praise of Rehman, First Minister of Scotland Nicola Sturgeon described the senator as a “negotiator with grit,” stressing that she had given a “powerful account of the devastating floods in Pakistan, highlighting the injustice at the heart of climate change” during the COP27 summit in Egypt last month.

“She told us ‘the bargain made between the global north and global south is not working.’ Through the power of her argument, she forced developed countries to listen,” wrote Sturgeon, referring to the key role played by Rehman in the U.N. approving the creation of a special fund to cover the losses suffered by vulnerable nations hit by the impact of climate change.

“Her negotiating skills, her pragmatism in navigating the blocks that developed countries put in her way and her campaigning voice was instrumental in the progress on loss and damage at COP27,” continued the Scottish leader. “Her moral authority, representing communities suffering the impacts of climate change, led to the groundbreaking agreement to establish a fund that has given renewed hope to many in the global south,” she added.

“I have no doubt that Sherry will continue in her campaign for climate justice, for global financial reform and for the vital funds required to secure a future for those parts of Pakistan that will suffer the impact of this year’s floods for a long time to come,” she concluded.

When the U.N. talks began in Sharm el-Sheikh last month, loss and damage inflicted by climate-induced disasters was not even officially up for discussion. However, developing countries—most at risk of climate change induced calamities—banded together under the leadership of Pakistan and called on wealthier nations to help them adapt to the disasters triggered by climate change.

Loss and damage covers a broad sweep of climate impacts, from destruction of infrastructure to displacement of entire cultures. This year, a string of climate change-induced disasters struck countries across the globe, with Pakistan—despite only being responsible for 0.8% of annual greenhouse emissions—suffering record rainfall that left over 30 million homeless and caused damages estimated at $30 billion.