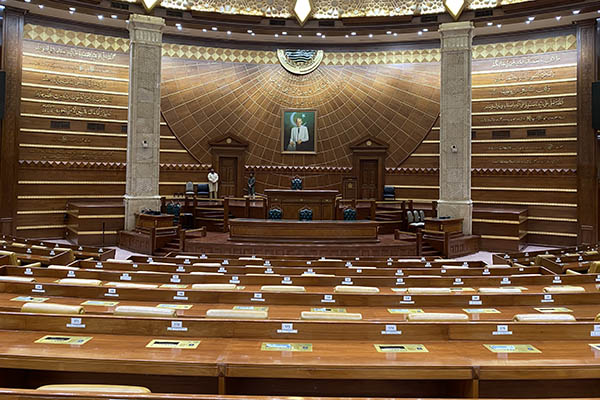 File photo of the Punjab Assembly

Amidst rumors of the ruling coalition in Islamabad once again aiming to oust the Pakistan Tehreek-e-Insaf (PTI) and Pakistan Muslim League (Quaid) coalition in Punjab, the provincial assembly’s marathon sessions are raising eyebrows over public funds being spent on lawmakers despite a majority of standing committees remaining dysfunctional.

Since April, the Punjab Assembly has convened for three separate session. Its 40th session commenced on April 2 and concluded on June 14, having met only twice during this time apart from re-electing the chief minister. This was followed by the 41st session, which lasted a record 127 days from June 15 till Oct. 22. As concerns mounted over the duration of the session, Speaker Muhammad Sibtain Khan prorogued it indefinitely and proceeded to summon the 42nd session on a requisition by the ruling alliance. Yet, despite the lengthy sittings, the Punjab Assembly has struggled to enact any major public welfare legislations, as there is virtually no involvement of the opposition.

Speaking with the Standard, Pakistan Institute of Legislative Development and Transparency (PILDAT) President Ahmed Bilal Mehboob said the assembly’s business had been hampered by standing committees remaining dysfunctional in the province for over 2 years following Pakistan Muslim League-Nawaz (PMLN) lawmakers resigning over the government refusing to appoint Opposition Leader Hamza Shahbaz as chairperson of the Public Accounts Committee (PAC).

Stressing that the standing committees performed vital business related to the budget and performance reviews during the assembly session, he added: “The performance of Assembly is reduced to less than 30 percent when the committees are not meeting as most of the administrative work is done through committee.” He said the incumbent government’s decision to suspend the live coverage of Assembly proceedings was also a step back, as it hampered transparency.

Khalil Tahir Sindhu, the chief whip of the joint opposition in the Punjab Assembly, lamented that despite being in session, the assembly was not enacting any legislation directly related to public welfare. “The government suspended rules under Article 234, which are applied only under serious circumstances,” he said, adding that the PTI-PMLQ coalition had tabled and passed 29 bills thus far, “most of them about universities that would only exist on paper and won’t see the light of the day.”

He also regretted that the government had failed to provide copies of bills to opposition lawmakers, claiming legislations were being enacted without following the parliamentary process. Rebutting these claims, Punjab Minister for Law and Parliamentary Affairs Muhammad Basharat Raja accused the opposition of refusing to participate in the Assembly, adding that none of its lawmakers had opposed the government’s suspension of rules.

“The bills and legislations are shared with the opposition members,” he claimed, lamenting that they did not offer any amendments or objections and showed up to the House without doing their homework.

“The opposition members do not participate in the assembly,” he reiterated. “They only come for question hour sessions and usually leave after a few questions under one pretext or another,” he said, adding that the opposition had not proposed any amendments to the Rules of Procedure or any legislation that could make the forum more effective.

“Instead of indulging in blame games, the opposition should play a parliamentary role and participate in parliamentary business,” he added.

However, Sindhu maintains that it is the government’s failure to revive the standing committees that has made governance virtually dysfunctional. Noting that no meeting of the Public Accounts Committee had been held for the last seven months, he said the “needless” sessions were costing Rs. 15 million of taxpayer funds daily, including Rs. 15,000 daily allowance for each parliamentarian. According to PILDAT, the budgetary allocation for each MPA in the Punjab Assembly comes to Rs. 9.9 million, compared to Rs. 35.8 million/MPA for Balochistan, which has passed the lowest number of laws. In Sindh, the budget stands at Rs. 17.1 million/MPA, while in Khyber-Pakhtunkhwa it has hit Rs. 12.6 million.

To questions on why he felt the provincial government had delayed proroguing the 41st session, the chief whip opined that the ruling coalition believed the governor could not ask Chief Minister Parvez Elahi for a vote of confidence so long as the House was in session. This, he maintained, was a faulty belief. “As per law and what is enshrined in the Constitution, the governor can ask the C.M. to take a vote of confidence even if Parliament is in session,” he said.

Validating the opposition’s view, minister Basharat said both the Punjab Assembly and the National Assembly had held marathon sessions, as both were in the same situation. “A sword for vote of confidence is hanging over both assemblies and they are stuck, but nobody would talk about the longest session of the National Assembly,” he said, adding that the opposition’s criticisms were little more than an attempt at political point-scoring. “We admit that the 41st session was the longest one, but it was the need of the hour under serious political crisis. It was prorogued last month and now the 42nd session is underway,” he said.