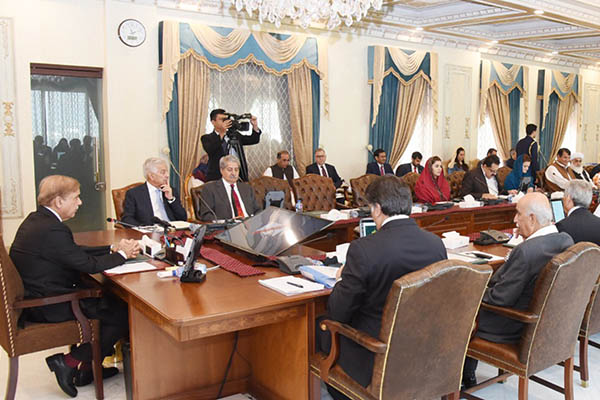 The federal cabinet on Tuesday approved a series of power sector reforms, including the installation of advanced meters on power transformers, to stem line losses and end corruption to ensure better service delivery.

According to a statement issued by the Prime Minister’s Office after the meeting, the cabinet approved an expansion of the installation of advanced meters project from Islamabad to the rest of the country to tackle the issue of line losses, which currently exist at 7 percent. Prime Minister Shehbaz Sharif also ordered the preparation of a list of corrupt officers in power distribution companies, as well as the appointment of well-reputed officers on various posts to improve the functioning of these companies, reduce line losses and ensure better service delivery. He said that high performing officers should be further encouraged with public appreciation and awards.

During the meeting, the cabinet was given a briefing by the Power Division on electricity theft, line losses and the existing strategy to reduce them. It was also briefed on power theft, line losses, and faulty bills in distribution companies. The prime minister, per the statement, directed the power division to submit in the next cabinet meeting a comprehensive report on the vacant posts of essential staff in DISCOs, stressing that the employment process should be transparent and in accordance with the best global practices.

Expressing his dissatisfaction over the 7 percent line losses, the prime minister set up a committee headed by Defense Minister Khawaja Asif for the formulation of a comprehensive plan to reduce the line losses in phases and submit recommendations for reforms in power distribution companies.

The cabinet, per the statement, also approved a recommendation of the Power Division to promote low-cost solar power initiatives nationwide to reduce the imports of costly fuel. Among the steps proposed were operating existing power units on solar energy during the day; granting permission to private investors for the installation of 11KV feeders in rural areas and the shifting of the government-owned buildings to solar energy.

The federal cabinet meeting also approved measures to complete the ongoing census exercise as soon as possible; provide seeds to farmers for the wheat crop in collaboration with provinces; and a Rs. 17 billion technical supplementary grant for the Sustainable Development Goals Achievement Program for the ongoing fiscal year.

The prime minister, during the meeting, informed his cabinet about his recent foreign tours, noting he had held detailed meetings with various global leaders and discussed agriculture commodities, gas, rail, road, infrastructure and linkages, and energy corridors. He said it had been decided that Pakistan would soon host a Central Asian States summit in Islamabad to decide on the establishment of rail, road and energy corridors linking Gwadar and Karachi ports with regional states.