Gen. Bajwa Reiterates Army’s Resolve to Remain out of Politics 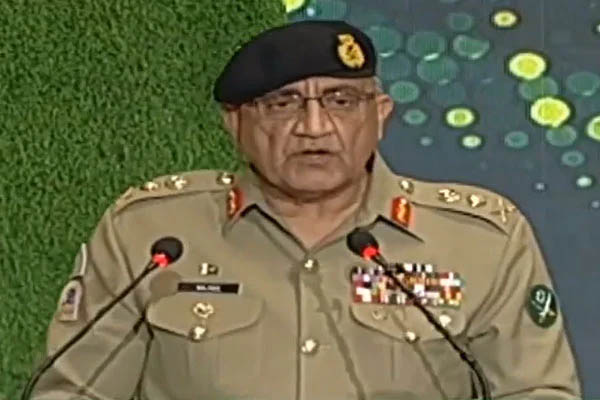 In what he described as his final public address before his retirement next week, Chief of Army Staff (COAS) Gen. Qamar Javed Bajwa on Wednesday reiterated the Army’s resolve to remain out of politics, admitting that the military had “unconstitutionally” interfered in Pakistan’s political process over the past 70 years.

Addressing the Defense and Martyrs Ceremony at the General Headquarters—the annual ceremony is usually held on Sept. 6, but was delayed this year due to the floods—in Rawalpindi, the Army chief he had spent several years noting that neighboring India’s army rarely received criticism from its citizens “despite numerous human rights violations.” By contrast, he lamented, the Pakistan Army attracted much criticism despite all the services it rendered for the country. “In my view, this is because of the Army’s repeated interference in the political process in various ways,” he said, stressing this was “unconstitutional.”

While the Army chief did not specify the quantum of the military’s political interference, it has been widespread, ranging from several military coups to the “hybrid regime” that was popularized under the PTI government. Throughout, several politicians have served as facilitators, encouraging the Army to step in and take down their rivals, in a bid to secure immediate gains.

Claiming this “interference” had continued until February last year, he said the military had then decided—after “much deliberation”—to no longer interfere in Pakistan’s politics. “I want to assure you that we are strictly adhering to this decision and will continue to do so,” he maintained. Regretting that instead of hailing this constitutional decision, “some segments” had subjected the Army to severe criticism and abuse because of it, he said it was “right” of the general public and politicians to criticize the military, but care must be taken in the choice of words and tone.

In what appeared to be a clear reference to the Pakistan Tehreek-e-Insaf (PTI)—which he did not outright name—Gen. Bajwa accused the former ruling party of creating “a fake and false” narrative against the Army, which he said it was now “running away” from.  Regretting that senior military officials had been unfairly abused, he said he wanted to make it clear that the Army could do much, but it would never go against the national interest.

PTI Chairman Imran Khan, since his ouster in April through a vote of no-confidence, has repeatedly targeted the Army for criticism and abuse, accusing “some individuals” within it of colluding with “foreign conspirators.” Describing them as “traitors,” Khan has claimed even if they were not involved, their failure to “prevent my ouster”—a clearly unconstitutional demand—was against the national interest.

It was naïve, stressed the COAS, to believe the military would not do anything if there was a foreign conspiracy against Pakistan. “That would have been a major sin,” he said, adding that anyone who believed they could sow divisions between the Army and the general public would see their efforts come to naught.

Maintaining that the Army exercised restraint in the larger national interest despite having the resources and opportunities to respond to PTI’s criticism, he said: “I’m ready to forgive this inappropriate and aggressive attitude against me and the military and move past it because Pakistan is bigger than [all of] us… people and parties come and go.” He said the “Army has started its catharsis” and now expected politicians to likewise make amends.

Stressing that Pakistan’s problems were a result of mistakes “committed by institutions, political parties, and civil society,” he said it was important to learn from these errors. Warning that the country was currently in the midst of a severe economic crisis, he said no single political party could pull the country out of this mess. Political stability is essential to resolve this crisis, he said.

The time has now come, he said, for all stakeholders to set aside their “egos,” learn from past mistakes and make Pakistan a regional power. Pakistan must evolve a democratic culture, he said, stressing a major challenge was lack of tolerance in political parties for their rivals. Referring to the Pakistan Democratic Movement (PDM) calling the PTI government “selected” while in opposition while the PTI had termed the incumbent government “imported,” he said all parties should accept the results of all elections so the next government could simply be considered “elected.”

Earlier, Gen. Bajwa claimed that while the military’s primary role was defense of the country’s borders, it had also played a role in dealing with Financial Action Task Force, merging the erstwhile tribal areas into Khyber-Pakhtunkhwa, fencing the Pak-Afghan border, buying gas from Qatar, and dealing with the COVID-19 pandemic and a locust invasion. “Army has always gone beyond the call of duty in the service of the nation and will continue to do so,” he said.

The Army chief also commented on the creation of Bangladesh after the surrender of Pakistani troops in the former East Pakistan in 1971. “I want to correct the record. First of all, the fall of East Pakistan was not a military but a political failure. The number of fighting soldiers was not 92,000, it was rather only 34,000. The rest were from various government departments,” he claimed, adding that these 34,000 had fought 250,000 Indian army soldiers, and 200,000 trained Mukti Bahini fighters.

He said the sacrifices of the soldiers who fought in East Pakistan were not recognized in the country, which was a great injustice, and vowed to continue speaking for them and their sacrifices for the nation.