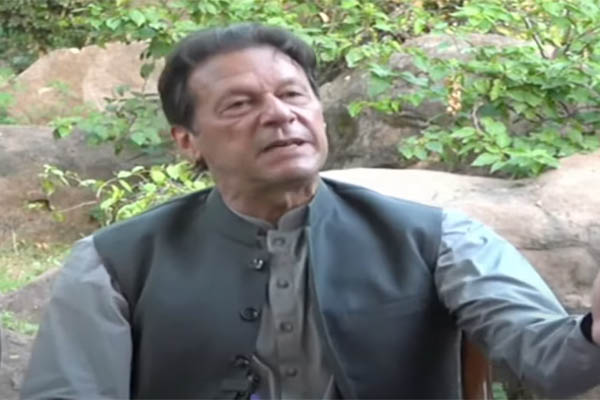 Pakistan Tehreek-e-Insaf (PTI) Chairman Imran Khan on Monday admitted to “backchannel” talks with the security establishment to secure early elections, but maintained they have not yielded any clarity for now.

Addressing a press conference after winning five of 6 by-elections for the National Assembly, he refused to confirm or deny rumors of a meeting between him and the senior-most generals of the Pakistan Army, but admitted some talks were ongoing. “Negotiations, what should I say … they are happening and not happening. Whatever little we have done over backchannels, there is no clarity as yet,” he said, accusing Pakistan Muslim League (Nawaz) leader Nawaz Sharif of preventing any progress.

“I know why that clarity is not there, because Nawaz Sharif is afraid of elections,” he alleged. “Unless he decides, elections will not take place. He is afraid that if all parties ganged up couldn’t defeat [me], if elections are held they will lose. He wants to drag this on, no matter if the country goes to the dogs,” he said, claiming the former prime minister wanted to delay elections because he would see how popular the PTI was right now.

“He [Nawaz] thinks if this [government] is dragged on, PTI’s wave can be quelled,” he said, claiming the reverse would happen. “[Nawaz Sharif] cannot contest elections while having neutral umpires. On the other hand, I am the one who has always supported neutral umpires,” he said, seemingly departing from his repeated narrative of “only animals being neutral.” Alleging that he believed Sharif’s disqualification from holding public office would soon be reversed, he added that he was ready to contest polls against the PMLN leader.

To a question on whether he was willing to also negotiate with the government, Khan reiterated that he could not sit down with “criminals.” He also reiterated that the next Army chief should be appointed on merit and neither Nawaz, nor PPP leader Asif Ali Zardari should have any say in it.

The PTI chief also addressed criticisms of his repeatedly threatened long march on Islamabad, claiming a meeting of his party’s senior leadership had decided it would announce a date later this month. “I am giving them [government] time just for the sake of the country,” he claimed, adding that if they don’t announce polls “soon” then he would begin his march.

Claiming the PTI would be ready to “deal with violence” this time, he warned that “no one” could control large crowds once they have started demonstrations. Evoking Sri Lanka, he claimed there could be “chaos” if the long march occurred, adding any damages to lives or property would then be the fault of the incumbent rulers.

At the outset of his press conference, Khan reiterated his criticisms of the Election Commission of Pakistan (ECP), accusing it of “rigging” the polls against him on the Karachi seat he lost in Malir. Claiming the poll results—in just 6 constituencies of the country’s 342—were a “referendum” against the government, he said this was “proof” that early elections should be called.

The ousted prime minister also condemned the arrest of PTI Senator Azam Swati over a tweet against the Army chief. “Since the appointment of a person in Islamabad, leaders of PTI are being picked and subjected to sexual torture,” he alleged, claiming this was being done to “please the Army chief,” who he said “I’m sure is not even aware of it.” This has widely been seen as a veiled reference to the incumbent ISI chief. “Unfortunately an impression is being created that the Army is above the law and that Pakistan is a banana republic since it is not a big deal to speak against Army chief in other countries,” he said, perhaps forgetting his own government’s attempts to penalize any criticism of the Army chief of even members of the federal cabinet.