PTI chief continues long march, claiming the ‘establishment’ cannot stand against the desires of its people 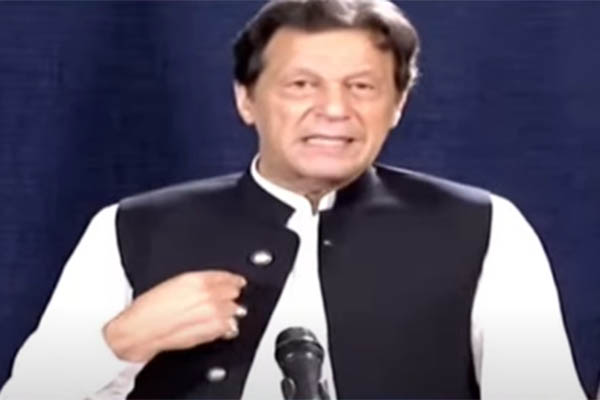 Pakistan Tehreek-e-Insaf (PTI) Chairman Imran Khan continued his long march on Islamabad for a fourth day on Monday, reiterating broadsides against senior officials of the armed forces and threatening a defamation case against the chief election commissioner (CEC) over his disqualification in the Toshakhana reference.

Commencing the day’s march at Kamoke—the PTI chief has been covering roughly 10km daily before returning to his home in Lahore for the night—he reiterated his demands for the security establishment to recognize the public’s demands for fresh elections. “No country’s establishment can stand against its people since their unity alone can guarantee a nation’s stability and sovereignty,” he said, seemingly urging the establishment to retreat from its “apolitical” aims by repeating claims of God not permitting neutrality.

Stressing that the establishment should not side with “corrupt looters,” he said that if it did not end its support for the incumbent government, it would be considered an accomplice and would disgrace itself. He also repeated his allegations of the PPP and PMLN leaderships returning through power through a “NRO” with then-president Pervez Musharraf, maintaining they had been ousted by the people in the 2018 general elections. “However, the establishment again imposed those corrupt thieves on the masses after dry-cleaning them,” he said, adding that the establishment could not brand someone “corrupt” at one point and then declare them “clean” at another.

Maintaining that he had no desire for dialogue with Prime Minister Shehbaz Sharif—who he said had no authority and only served to cater to the establishment—he said he wanted a message to those who wielded “real power” in the country. “If the people and institutions look in the opposite directions, no institution can work,” he said, claiming he was the only politician with grassroots support, as evidenced by his personal victory in seven of eight National Assembly seats in recent by-elections. “They [voters] know I will not go to Parliament, but they still prefer me over the corrupt,” he claimed.

Describing the CEC as a “dishonest” man, he said that he would file a Rs. 10 billion defamation suit against Raja over the Toshakhana ruling finding him guilty of “corrupt” practices. He also claimed—in an echo of his earlier, and proven false, claims of resigning as P.M. if even 500 people demanded his ouster—he said he would end his political career without waiting for a court ruling if he committed any illegal actions.

During his addresses—the ousted prime minister gave three, virtually identical speeches on Monday—the prime minister said the pace of the long march meant he would need 8-9 more days to reach Islamabad, around Nov. 8 or Nov. 9, compared to the PTI’s earlier announced Nov. 4. He urged people to be ready to join him in Islamabad when he neared the federal capital, exhorting them to “walk” there if they had no other options.

Per routine, Khan ended every speech by taking an oath of allegiance from his supporters, calling on them to be ready to render any necessary sacrifice for ‘real independence.’

Separately, in an interview with anchor Imran Riaz Khan, Khan responded to a question about rumors of the Army imposing a martial law if the political unrest persisted by saying: “Let them impose martial law. Why are they trying to scare me with it?” Claiming the current situation was “worse” than the martial law imposed by Gen. Pervez Musharraf, he alleged that when PTI’s Azam Swati and Shahbaz Gill were tortured they were told that “Imran would face the same.”

Maintaining he would not be intimidated, he said “they are cowards,” in an apparent reference to the armed forces. “They are enemies of the state,” he said, claiming they were trying to “weaken” the country by “weakening” the PTI.

Responding to his statement, Information Minister Marriyum Aurangzeb said it proved that Khan was not interested in elections. “His mindset is that of a dictator, a fascist, a media predator,” she said, warning that Khan’s repeated warnings of “bloodshed” would not be tolerated.