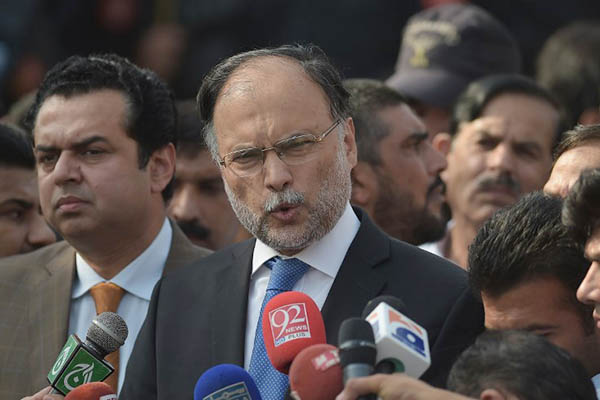 Planning Minister Ahsan Iqbal on Friday said the government will announce the new Army chief within a day of the prime minister receiving a summary on the posting.

In an interview with private broadcaster Geo News, he stressed that the new Army chief would be appointed before Nov. 29, when incumbent Chief of Army Staff (COAS) Gen. Qamar Javed Bajwa is set to retire upon the completion of a three-year extension to his tenure. To a question on Pakistan Tehreek-e-Insaf (PTI) Chairman Imran Khan’s allegations over Pakistan Muslim League (Nawaz) leader Nawaz Sharif wanting to appoint a “favorite” general to the post, the minister recalled that the last Army chief appointed by the thrice-elected prime minister had been Gen. Bajwa.

“Khan approved Nawaz’s decision to an extent by extending the COAS’s tenure without consultation [with opposition],” he said, adding that just recently the PTI chief had claimed he would have no issue with Gen. Bajwa’s tenure being extended further.

Lamenting that nobody had tried to politicize the appointment of the Army chief like the PTI chief in Pakistan’s history, he said the decision was solely the prime minister’s mandate, adding that he could discuss the issue with anyone he wished, including party leader Nawaz. “P.M. Shahbaz can also consult his cabinet,” he said, stressing that the decision would be taken on merit at the right time.

Discussing P.M. Sharif’s meetings with his elder brother in London, he said the ruling coalition would be taken onboard about their contents upon his return to Pakistan. He also rubbished Khan’s allegations of the Army chief appointment “benefiting” the government, noting that no former prime minister had gained any advantage by appointing a particular Army chief. “Former prime ministers Zulfikar Ali Bhutto and Nawaz Sharif appointed Gen. Ziaul Haq and Gen. Pervez Musharraf, respectively, as Army chiefs. What benefit did they get?” he asked.

Iqbal also rubbished speculations over the government considering an extension to Gen. Bajwa’s tenure, who has already commenced his farewell tours.

Speculation over the Army chief’s appointment has gained fervor in light of Prime Minister Shehbaz Sharif traveling to London after attending a climate change summit in Egypt. Since his arrival in the U.K. earlier this week, the premier has already conducted four meetings with PMLN leader Nawaz Sharif, with sources within the party suggesting the issue of the Army chief had been discussed.

According to these sources, the PMLN leaders vowed to not come under any pressure over the appointment of the Army chief or early elections—both key planks of the PTI’s ongoing long march on Islamabad. Nawaz has reportedly urged his younger brother to pick the senior-most officer as the next Army chief.

In a posting on Twitter on Friday night, Defense Minister Khawaja Asif—who has been accompanying the prime minister in London—confirmed that the issue of the next Army chief had been discussed, but stressed that any final decision would be taken after consultations with all coalition partners.