In address, Pakistan’s prime minister regrets opposing PTI’s unwillingness to talk with rivals during its four years in power 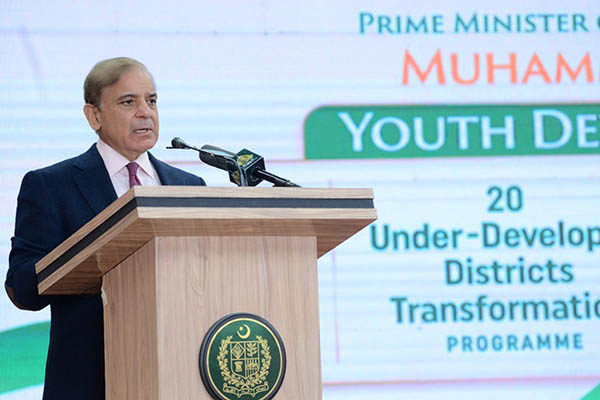 Prime Minister Shehbaz Sharif on Thursday reiterated his willingness to talk to leaders of the opposition “in the larger interest,” while noting that the previous government had refused to conduct any dialogue with its rivals during its four years in power.

Addressing a ceremony in Islamabad where he announced scholarships and other opportunities for Pakistan’s youth, he lamented the current opposition’s “double standards” of accusing the incumbent government of refusing dialogue after spending four years stonewalling its rivals.

During his speech, the prime minister announced 20,000 internships for young engineers and 75 scholarships to students for studies in top universities of the world. He said the Ministry of Planning and Development had been tasked with carrying out youth initiatives, including the allocation of Rs. 40 billion in 20 most underdeveloped districts and the construction of 250 mini sports complexes. This was just the start, he stressed, adding that the program would be expanded further in future.

Recalling the measures he had announced during his tenure as Chief Minister of Punjab, Sharif said the PMLN-led government—under the leadership of Nawaz Sharif—had undertaken various programs to ensure high-quality education, scholarships, and laptops for millions of students. He noted that his government had set up the Punjab Endowment Fund, which had disbursed Rs. 20 billion in scholarships to academic high-achievers. Similarly, he said, millions of students had received technical education under the Punjab Skills Development Program.

According to the prime minister, the previous government had sent hundreds of students to Turkiye and China, with many Pakistanis who had learnt Chinese there now operating as interpreters on projects of the China-Pakistan Economic Corridor (CPEC). Authorities had, he said, also distributed around 75,000 vehicles to people to help them earn a living. During his time as Punjab chief minister, he said he had introduced the Danish School System, which enabled orphans and children from less privileged backgrounds to receive quality education.

On the current government’s accomplishments, he said the ruling coalition had taken tough decisions to save the country from economic default, and had already distributed Rs. 66 billion among families affected by the floods through the Benazir Income Support Program (BISP). Billions of rupees, he said, had also been spent on food, drinking water, medicines, blankets, tents and mosquito nets for flood-stricken communities, adding that “friendly nations” such as China, Turkiye, Qatar, Saudi Arabia, the U.A.E., the U.S., the U.K. and the E.U. had also provided assistance.

The prime minister also regretted that billions of dollars had been “wasted” by delaying the construction of projects such as the Neelum-Jhelum hydropower project and the Reko Diq mining project.