In briefing, State Department spokesperson refuses to comment on Imran Khan’s disqualification, saying it is an internal matter 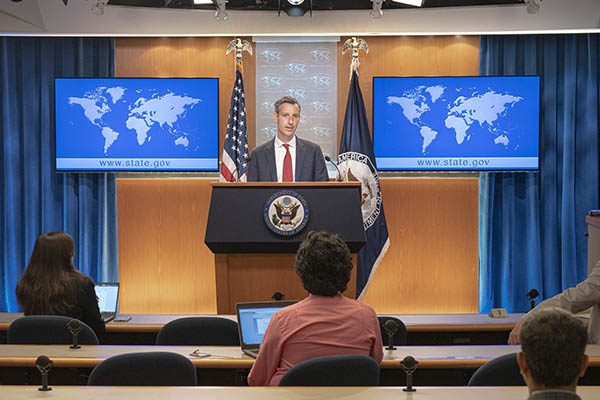 U.S. State Department spokesperson Ned Price on Monday said Washington is “deeply saddened” by the killing of journalist Arshad Sharif in Kenya and urged Nairobi’s government to ensure a full investigation into the incident.

On reports that Sharif’s visa application to the U.S. had been rejected, Price said he could not “speak with any specificity” regarding an individual, but stressed that Washington had programs around the world to bolster protections for those who are exercising the right to freedom of expression and the right to information. “And it’s clear through his work that Arshad Sharif was dedicated to that fundamental right of freedom of expression—took him around the world. His work was known around the world,” he said.

“USAID has a number of programs to work with governments around the world to bolster those rights, to bolster independent media. We have taken action. The department and others have taken action when we are aware of efforts on the part of governments around the world to intimidate, to harass, to otherwise seek to silence the voices of those who are so committed to that freedom of expression,” he added.

To a question on whether journalists critical of the political system in Pakistan should feel safe in the U.S. after Sharif’s killing, the spokesperson stressed that the U.S. cherishes human rights and feels that they are universal.

“And when countries fail to respect these rights, when they actively try to contravene these rights—in this case, when they attempt to suppress, repress, or otherwise harass journalists—they tend to hear about it from the United States. And that’s a good thing,” he added.

The State Department spokesperson also addressed a question on the disqualification of former prime minister Imran Khan, saying the U.S. would not interfere in any internal matter of Pakistan. “We are not going to inject ourselves into internal Pakistani politics or into a dispute between the court and the Pakistani political system,” he emphasized.